Fun and games for Speed and Webber 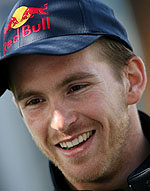 Scott Speed has accused Mark Webber of brake testing him during yesterday's second free practice session, leading to both cars colliding just moments before the chequered flag came out.

"At the end of the session, for some reason I don't understand, Mark did the most strange thing I have seen since I've been in Formula 1," said the American. "I haven't been brake tested like that since my karting days. I'll be interested to see what Mark has to say about that!"

Webber, a leading light in the Grand Prix Drivers' Association (GPDA), claims the incident was the American's fault, suggesting that the Toro Rosso driver had lost concentration and fallen asleep.

According to the Australian, Speed had braked far earlier than normal at the previous corner - a brake test perhaps? - and consequently he opted to pass the Toro Rosso driver. It was at the next corner that they tangled, leading to Speed's claim that it was Webber who was at fault.