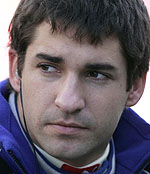 Timo Glock has pushed his race one disappointments behind him by annihilating the field in race two this morning at the Circuit de Catalunya in Barcelona. The German put on an imperious performance to claim the win from seventh on the grid, easily leading home poleman Javier Villa, who in turn was more concerned with the view from his mirrors, which were full of the cars of Lucas di Grassi and Bruno Senna.

Glock made up one position before the race got under way when Borja Garcia stalled on the grid. After another warm up lap the race got underway in earnest, with Villa making a strong start but di Grassi and Senna being even stronger, the pair arriving right on the tail of the Spaniard into turn one.

Further back Roldan Rodriguez undid his good work from yesterday by spinning in the first corner, taking Jason Tahinci with him, but up at the front Villa's teammate and fellow front row starter Sergio Jimenez had been swamped, lining up out of turn one right behind Glock in sixth position.

Before the first lap was over the German had blown past Mikhail Aleshin to put himself up with the leading trio, and he was soon in a podium position as he powered by Senna one lap later.

At the back of the field Luca Filippi also made a storming start, overtaking six drivers on the first lap, including four on the back straight alone, to put himself into 15th position – with no expectation of a points finish the Italian was driving for fun, and by all appearances he was having the time of his life.

Villa knew that his only chance was to try and use the clear track in front of him to put some air between himself and his pursuers, but already it looked like his card was marked – he could pull away from di Grassi, but Glock was able to easily slide past the Brazilian at turn ten and was clearly hungry for more.

Further back Christian Bakkerud was putting up a brave fight to hold onto ninth position – he had seriously pinched a nerve in his back in race one and had to be lifted out of the car and to the medical centre, but he was determined to race as long as he could today despite the constant pain.

He soon had a train of cars forming behind him though, and Giorgio Pantano was making best use of the opportunity to pick off drivers every time they returned to the front straight.

On lap seven the inevitable came as Glock powered by Villa down the straight to claim the lead, and he never looked back – a string of fastest laps guaranteed him of the top step on the podium which had been denied him in the earlier race.

But further back the race was heating up. Pantano was on a mission, running all over the rear of Antonio Pizzonia as the pair blew past the ailing Bakkerud, who was soon back in the pits and being helped from his car again as the fight behind him caught up to the battle for seventh between Vitaly Petrov and Kazuki Nakajima.

Seventh soon became sixth when ahead of them Aleshin just lost his car in the final chicane and came to a halt across the track – prompt action from the marshals soon got him out of the way, but he knew he had donated a points paying position to his countryman as he trudged back to the paddock.

But Petrov was struggling to hold on to the spot himself, as he was coming under enormous pressure from the trio behind him. For five laps he held them back, despite Pantano sliding by Pizzonia and applying more pressure directly, but the fight for the final point was red hot.

As was the fight further up for the two podium positions behind Glock. Villa was doing just enough to stay ahead of di Grassi, but mostly because the Brazilian had his mirrors completely full of Senna, who was looking for a way past, lap after lap, at almost every corner on the track.

Pastor Maldonado was doing his best to make sure he was in everyone's attentions too. After overshooting his grid position and causing an extra warm up lap he had put himself back up with some of the other drivers, only to clatter Ho-Pin Tung off the track with an ill-considered move at the final chicane, putting the Chinese driver into retirement through no cause of his own once again.