Hulkenberg to test for Renault? 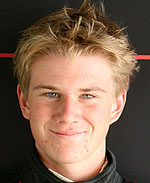 According to reports in the German media, A1 GP sensation Nico Hulkenberg could have a test drive with the Renault F1 team later this year.

The youngster, who is managed my Willi Weber, is currently third in the F3 Euroseries, having finished second in the first race of the season opener at Hockenheim.

Last week, Hulkenberg, who helped his country win the second season of A1 GP almost single-handed, was highly praised at the series' awards dinner by another Weber protege, seven-time world Champion Michael Schumacher.

According to reports, Weber is in negotiations with Renault boss Flavio Briatore with a view to getting the youngster a test drive later this year.

However, in addition to the fact that Renault already has a number of up and coming young hopefuls on its books, there is also the question as to how the Italian will view the fact that he has no financial (management) interest in Hulkenberg.

Then again, if the 19-year-old is as good as some people believe him to be, perhaps Weber will attempt to arrange a test with the team with which Schumacher enjoyed so much success, Ferrari.