Pat Symonds looks ahead to Spain 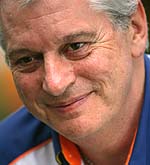 Formula 1 has enjoyed a four-week break between the Bahraini and Spanish Grands Prix. What has been the agenda for the ING Renault F1 Team?
Pat Symonds: Leaving Bahrain we knew that the “break” to the next race would be one in name only – and that's exactly how it has proved. There has been a huge amount of research and analysis conducted, as we work on finding the solutions to our current problems. In parallel with that, we have been pushing forward with our usual performance development, testing new parts for the coming races.

What areas have you work focused on as you look to resolve the current performance problems?
PS: Of prime importance has been the ability to run on track, with additional instrumentation that cannot be used during the race weekends. We have collected gigabytes of data and conducted detailed analysis of them. As we have always said, this initial phase is very much a process of elimination: our approach has been to look at every possible cause, then discard them as our work advances in order to pin-point the areas for more detailed investigation. It is painstaking work, but we have made good steps forward since we raced in Bahrain.

Will that progress be reflected in a significant improvement in on-track performance in Barcelona?
PS: In previous weeks, we have said that the road back to our normal level of competitiveness will be a long one, and that is still true. We have made good progress in our analysis and understanding of the R27, but we are not expecting a leap forward in our competitiveness relative to our rivals this weekend. It will be a tough race weekend where we have to fight for every point.

After a difficult start to the team's 2007 campaign, what positives can you take from the season so far?
PS: The positives are not as easy to find as in previous years – but that doesn't mean they are not there. The team at the circuit has worked tirelessly during winter testing and the first three flyaway races, including a test session in Malaysia. Throughout, they demonstrated why we have just won two championships: race reliability has been exemplary, and details like the pit-stops were spot on. The work back at the factory is less public, but it has been no less intense. Analysis after analysis has been conducted, solutions tested and implemented. The work has been above and beyond the call of duty for all of our staff and the response to our current situation has been exemplary.

Let's talk about the drivers, and Giancarlo first of all. How has he been driving during these opening races?
PS: Giancarlo has been very impressive so far this season. A lot of our esteem for him is rooted in the way he handled our 2001 season, when he put huge effort into making the most of a difficult car. We are seeing something similar this year. The R27 is a hard car to drive consistently, but in spite of this, he has driven very consistent races. He has taken the car to the limit of what it is currently capable of, and contributed in every way he can to helping resolve our current problems. We couldn't ask any more of him.

Heikki endured a difficult debut race, but performances have improved since then. What is your assessment of the beginning of his F1 career?
PS: With a rookie driver, the one thing you need to give him so he can perform is a car that he can trust. It needs to be consistent, and allow recovery from the inevitable mistakes a rookie makes. At the moment, Heikki doesn't have that kind of car, and it was all too obvious in Melbourne. Since then, though, he has applied his intelligence, learned to drive the R27 within its limits and, like Giancarlo, he has worked tirelessly to help the engineers understand the problems. He has shown he is a team player, and that he can play his role as a motivator too.

How will the R27 suit Barcelona this coming weekend?
PS: Like our rivals, we have completed a lot of miles on this circuit, and we know that it is a tough test of an F1 car. Although the nature of the track has changed slightly with the new chicane at turns 12/13/14, we can still expect very close competition. Last year, P5 to P9 in qualifying were separated by just 0.13s, and if anything, the times in the midfield group are even closer this year than last. That means getting into third qualifying will remain a tough challenge, just as it has been at every race so far. But we will do our best to rise to it.

Will the car feature new developments?
PS: Yes. It is important to keep pushing our development programmes in addition to our problem-solving, and that is exactly what we are doing. We have aerodynamic and mechanical updates to the car in Barcelona, and of course, we have been working hard to ensure we maintain our record of reliable race finishes.

In the current circumstances, have you been tempted to look back at the past two years, when the team arrived in Barcelona leading the championship?
PS: Motor racing is all about looking forward, not being nostalgic about the past. We are certainly in a tougher situation than in the last two years, and the reward for our hard work is less tangible. It takes character to find real reward in achieving the maximum with the equipment available to you, and to work methodically to resolve problems. Real character is something that this Renault team has in abundance, and it's what makes me optimistic that it will be a case of when, not if, we bounce back.