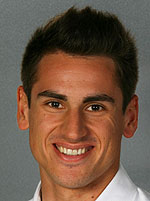 They say bad things happen in threes, and Adrian Sutil is certainly hoping that his run of bad luck has come to an end. In all three Grands Prix so far this year he's been involved in first lap dramas after making great starts, so he's yet to have a chance to show what he can really do in an unhindered race.

In Bahrain, despite being three laps down after a long delay in the pits, Adrian to his credit was able to focus on getting as much out of the afternoon as he could: for a rookie every lap is part of the learning curve.

'I had a little bit of a problem in the fourth corner!,' Adrian recalls. 'For sure it's not good to have problems on the first lap. Sometimes it's probably better to start very, very slowly, let the other cars go, and then start your race!'

Unfortunately for Adrian he had started well, but picked up damage to his nosecone as a result of an accident between Speed and Button and returned to the pits at the end of the first lap. It wasn't a case of simply giving him a new front wing; the nose mounting pins were bent, and they had to be replaced before he could resume. A brief safety car period helped to minimise the loss of time, but nevertheless he was already several laps down on the pack when he finally returned to the track.

'It was a little bit frustrating, and actually I thought that I would have to retire already. It was just the mountings that were a little bit bent, and they had to replace them. I lost about five minutes before I could go. These things we have to improve, but I have no worries about the future. We will be up there.

'Really, in the end the result was the same, because at the moment we're not fast enough to race other cars. But everybody was happy with my race performance, the lap times were very fast.'

Indeed Adrian set a fastest race lap that was within a second of those achieved by Rubens Barrichello, Ralf Schumacher and Alex Wurz, and a lot closer to the times of the Super Aguris. Bearing in mind the heavy knock his car took at the start, it was an impressive performance.

The last two races weren't helped by the fact that, unlike the opposition, the team hadn't tested at either Sepang or Sakhir. Both tracks were also new for Adrian. The story will be different in the next race in Spain, because for once he'll be familiar with the circuit. He ran at Barcelona for four days in February and early March, and he will have another day in the car shortly.

'I think it will be better there. We tested there in the winter, and we have one more test coming up. So I hope it will be easier. We already know about the set-up and the balance of the car, and maybe we can also see an improvement with the new aero package that we'll have there. And we'll try to be more competitive.'

One day of testing isn't very much, but Adrian is making good use of the down time. Apart from the usual fitness regime he's also taking the chance to have a good look back at the first three races with his engineers to see what he can learn.

'Now it's a good time to have a look at everything, the data and so on. You can re-set your mind, and think about everything. The free time is the time when you start to learn, and make progress. But right now I can't wait until the next race. I'm always looking forward, and I'm just enjoying F1 at the moment!'