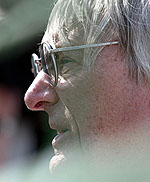 Though some continue to describe Lewis Hamilton as the 'new Tiger Woods', referring to the black golfer who has dominated the sport in recent years, others feel that the McLaren driver's colour has no relevance.

Bernie is one of the latter, insisting that the youngster's colour has nothing to do with the fact that he is one of the brightest talents to emerge in recent years.

"I wish people wouldn't keep on talking about him being coloured and all that," the F1 supremo said in Bahrain. "He doesn't need to have the praise because he happens to be coloured. He is just bloody good. He is young, good-looking and he talks to people."

For as long as one can remember, Formula One has had drivers capable not only of entertaining the purists but also attracting new fans to the sport, drivers such as Piquet, Mansell, Prost, Senna, Schumacher and Alonso.

With the retirement of Schumacher, many feared that Formula One might lose some of its sparkle, even though diehards anticipated the battle between Alonso, Massa and Raikkonen with relish. Then came Hamilton, who, if nothing else, has reminded the British media that there is more to sport than football.

"He is doing a great job and has obviously done an awful lot better than anybody expected him to," said Ecclestone, mindful that a boost in popularity for the sport will do his coffers no harm.

"The point is he is selling the business, 100 per cent," admitted the Englishman. "I hope he will be the next superstar of F1. He has got all the makings.

"It is nothing to do with the fact of being good for England," he added, clearly aware of the frenzy the (British) media is working itself up to in anticipation of the McLaren driver's first win, "he is good for F1.