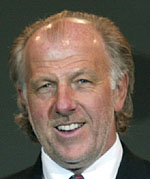 David Richards (right), boss of Prodrive, which is due to enter F1 in 2008 having secured the so-called 'twelfth team' spot, bringing the number of F1 teams up to the maximum number under the contemporary rules, has hit back at comments made by Frank Williams regarding his team's use of 'customer cars' in 2008.

"There is absolutely no question about it, customer cars are permitted in 2008," Richards told The Guardian, "Williams have entered the 2008 world championship accepting that condition. It all seems absolutely clear to me."

Williams has warned that he may take legal action against Toro Rosso and Super Aguri if they proceed with plans to use the Red Bull 2007 car and 2006 Honda, respectively.

Prodrive was one of 22 teams that bid for the slot on the 2008 grid, and though many of the bids appeared somewhat frivolous, there were a number of serious bids from companies which appeared to have most of the necessary infrastructure already in place, unlike Prodrive.

Then again, cynics insist that certain bids, namely Paul Stoddart's and another from Jean Alesi, which had the backing of McLaren, were rejected for political reasons.