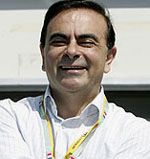 Renault and Nissan's President and CEO, Carlos Ghosn (right), has been appointed an Honorary Knight Commander of the British Empire.

In a statement issued on Tuesday, the British Embassy in Tokyo explained the honour is in recognition of Mr Ghosn's distinguished contribution to relations between the UK and Japan. It will be presented in early 2007 during a ceremony at the British Embassy, Tokyo by Britain's Ambassador to Japan, Sir Graham Fry.

In accepting the title, Mr Ghosn paid particular tribute to the staff working in the UK. "This honour is dedicated to the hard work and achievements of our 5,500 employees and 220 dealers that support the Nissan business in the UK," said Mr Ghosn. "The ties between Nissan and the UK are deep and stretch back over 50 years. I am deeply honoured by this recognition from the United Kingdom," he continued.

Mr Ghosn is the second Nissan employee to receive the honour, the first being Takashi Ishihara who was the company's chairman when he received the award in 1992.