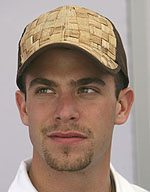 Venezuelan, Ernesto Viso (right), who finished sixth in the 2006 GP2 Series, made his F1 debut at Silverstone today.

Although the rain made conditions difficult, with Renault opting not to run, the youngster completed a number of laps in the Spyker MF1 in preparation for his debut as the Dutch team's Friday driver in Brazil next week.

"Despite very difficult rainy conditions I think we did some good work," he said, following the test. "I really enjoyed my first run in an F1 car and I am looking forward to Brazil. The factory team and the whole Spyker MF1 test crew have been fantastic and really have worked hard. They weren't scared of getting wet to keep sending me back out of the garage!"

"Ernesto did a good job today," added Dominic Harlow, head of race and test engineering, "familiarising himself with the team and the car's control systems. We began to accumulate mileage on some development gearbox parts and several control systems development items.

"Despite the bad weather Ernie impressed the team with his enthusiasm and approach and I'm sure he will make a very useful contribution to the programme in Brazil in ten days time."

"Ernesto did very well today," added Colin Kolles. "The conditions were not great but I understand that he handled the car well and his feedback to our test engineers was excellent. He has helped Spyker MF1 Team with some important development work that we were undertaking. I have watched Ernesto closely in GP2 this season and have been very impressed with his performances, I look forward to seeing him drive at Interlagos and have little doubt that he is ready for the challenge."

The test continues tomorrow (Thursday) with Markus Winkelhock and Christijan Albers taking over the driving duties.