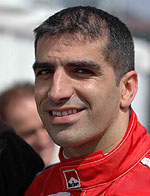 Marc Gene was the quickest of five drivers on duty at Jerez today.

As Ferrari prepares for a last ditch attempt at the 2006 constructors' Championship in Brazil, the Italian team today began a three-day test at Jerez, where it was joined by WilliamsF1 and McLaren.

Marc Gene and Luca Badoer were on duty for the Maranello outfit, with the Spaniard proving to be the quicker of the two, completing 102 laps in the process.

Both drivers, like their rivals spent much of the day focussing on tyre evaluations in preparation for the demands of Interlagos.

Tomorrow, Badoer will be joined by Michael Schumacher.

WilliamsF1 has Alexander Wurz and Narain Karthikeyan on duty, both using Toyota powerplants. However, whereas the Austrian completed 108 laps, which included a full Grand Prix simulation, his Indian teammate only complete 10 laps, sidelined for much of the day by numerous electrical problems.

"Alex and Narain were driving today with the new gearbox and Toyota engine in both cars," revealed test team manager, Mike Condliffe. "Alex completed a front tyre construction test in the morning and we then moved onto a race distance run in the afternoon which was successfully completed.

"We carried out some engine mapping work on Narain's car before we had some teething problems which prevented us completing all the running we had planned. The team will continue working on the car tonight to be back on track tomorrow."

McLaren's test proper doesn't begin until tomorrow, so today Lewis Hamilton carried out a shakedown, ahead of two full days of testing on Wednesday and Thursday, when the Englishman will be joined by Pedro de la Rosa.

Tomorrow, Toyota and BMW will join in the fun, while Renault and Spyker begin testing at Silverstone.