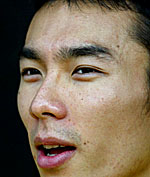 Super Aguri's Takuma Sato has been disqualified following an investigation by race stewards into an incident on the last lap of today's China GP.

Running a lap down on the race leaders, the Japanese driver found himself in front of a gaggle of cars as they fought over fourth position. Having passed Rubens Barrichello, Jenson Button closed in on BMW's Nick Heidfeld who was running in fourth and about to lap the Super Aguri.

Sato appeared to block the German, who had nowhere else to go, allowing Button through on the inside. As he attempted to get past the Super Aguri he was clouted by Barrichello, which put the German into a spin.

Although he was officially credited with seventh place, Heidfeld was bitterly disappointed to have lost fourth, and angry at Sato's actions.

"Sato, blocked me for almost a lap," said the German. "He was fighting, although he was a lap behind, and using an advantage he had at this stage of the race due to his Bridgestone tyres.

"Because of this, the other two Hondas caught me and Albers and Sato were in the way. Barrichello crashed into the back of me and after this I had to be happy to make it to the finish.

Heidfeld was particularly angry with Albers earlier in the race: "He stayed on the dry line and didn't let me pass. I had to brake on the wet, almost spun, went on the grass and lost a few seconds."

The stewards clearly shared Heidfeld's view, opting to add a 25s penalty to Albers time, and disqualify Sato, who had finished 14th on the road.

Rubens Barrichello was also called before the stewards, but his collision with Heidfeld was officially deemed a "racing incident".

The fact that both Honda drivers benefited from an incident instigated by a Super Aguri-Honda driver led to claims of collusion, however, this was denied by the Japanese manufacturer.

In a statement BMW claimed that Heidfeld had been "the victim of dubious manoeuvres".

However, Honda's Nick Fry firmly denied the suggestion: "It's a ludicrous suggestion, to think we had time to do and to think that is complete rubbish," said the Englishman, according to Reuters.

"If it did help Jenson, it didn't help Rubens,” he added. “In my view it was clearly a racing incident."