Briatore to stay out of the spotlight 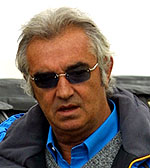 Talking to Italy's Gazzetta dello Sport, Renault boss Flavio Briatore has said that he intends taking more of a backseat role in future, keeping out the spotlight.

His admission comes 24-hours after the Italian revealed that he has signed a new 2-year deal with the French team.

"In 2008, I will delegate my appointment to someone else and I will stay away from the spotlight," he told the Italian publication.

The Italian, who has taken both Benetton and Renault to World Championship glory, admitted that he opted to remain in place in order to maintain continuity.

"I was pushed to carry on for two reasons," he said. "First, the fact that Renault's new president Carlos Ghosn is fully behind the F1 project. Second, the team will lose Fernando Alonso, so I preferred to give continuity to the work."

Last month, Briatore revealed that he had undergone surgery in Rome to remove cancer in one of his kidneys. Speaking at the time, he said: "As I convalesced I came to realize that at least 15 percent of my existence is superfluous. From now on, I intend dedicating a little more time to me, and to those who need me."

This prompted speculation that he would not be seeking to sort out a new contract once his current contract expired at the end of 2006. The speculation proved wide of the mark.

Briatore also admitted that it was due to doubts over the Trench team's long-term commitment to the sport that caused Fernando Alonso to switch teams - he joins McLaren next season.

"When Fernando decided last winter, Renault was changing president and there were no guarantees on the future," he said. "He wasn't feeling valued properly so he accepted a proposal. I don't step in over the choices of the drivers I manage - I only take care of their contracts and sponsors."