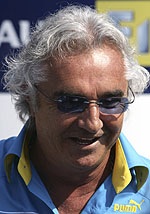 Flavio, you have signed with Renault for two more years. Is that a sign of confidence?
Flavio Briatore: Absolutely, and that's because I have confidence in the team. It is a privilege to be working for a worldwide leader like Renault, and to be representing them on a global stage. I wanted to sign for two years because had it been twelve months, we would have been going through the same questions about my future in six months' time. This way, we can concentrate on the job in hand: starting a new competitive cycle in 2007.

You have highlighted the importance of Carlos Ghosn's backing in your decision…
FB: In Formula 1, it is essential to have the confidence and the backing you need to win. I am proud to be working with a manager like Carlos Ghosn, who has a reputation of global standing. He has followed the F1 programme enthusiastically since he arrived at Renault, and he has committed the company for the long term. That gives us the stability we need to build for the future and manage the changes that are ahead of us. I have an excellent relationship with Alain Dassas, the team President, and together we will take the team forward into a new era.

The team will maintain a stable technical structure in the coming years. Will that be a key advantage?
FB: A team is only as strong as its weakest link. There are no weak links in the chain at Renault. Our team is the right size, with the right philosophy and the right people. Our management structure is light, allowing people to express their talent and focus on the main objective: success on the track. That is something unique in Formula 1 and at a time when other top teams are undergoing big changes in their technical departments, our continuity will be a key strength. It will give us the platform to challenge for championships in the future.

Talk to us about the team's new race driver, Heikki Kovalainen…
FB: Heikki has done a fantastic job this year. He knows the car, knows the team – and after a year as our official third driver, he knows the business of Formula 1, not just on the technical side but in terms of PR, marketing and everything else. There will be no bad surprises for him next year, and now his time has come to show what he can do as a race driver. He will be judged on his performances, but we are totally confident that he has what it takes to succeed at the highest level. Heikki is a very bright talent for the future of Formula 1.

What is your assessment of the Fisichella-Kovalainen pairing?
FB: I think it is a balanced driver line-up. Giancarlo brings us the experience of a proven race winner plus the attitude of a real team player, and we believe he can take another step up in performance next year to keep the team at the front of the field. He gives us the continuity we wanted for 2007. From the outside, Heikki is replacing a world champion – and some people may assess him on those terms. But within Renault, we are approaching it as a fresh start and the beginning of a new era for the team. Change is a natural process for any company, and at Renault, we see it as an opportunity rather than a burden. In our eyes, we are not losing a driver who has won the world title; rather, we are starting a new story with a future champion.

You have also recruited two test drivers – Ricardo Zonta and Nelson Piquet Jr. Why?
FB: Again, it is a balance of youth and experience. Ricardo has done an excellent job for Toyota in recent seasons, and his knowledge of the Bridgestone tyres will be invaluable as we make the transition for the 2007 season. Allied to his speed and experience, this will be a major asset for the team. As for Nelsinho, we had the chance to sign him – and didn't want to miss out. He has been one of the best two drivers this year in GP2, and he clearly has what it takes to succeed. Now, he needs to grow as a Formula 1 driver, and Renault is the perfect place to do it.

It is unusual to see a front-line F1 team, and potential world champions, running a rookie driver…
FB: It is, it has always been my approach and I think it is refreshing for a top team to do it. We always read about young drivers not having enough opportunities to get into Formula 1 but nothing happens. At Renault, we are changing that. The GP2 Series has been an excellent showcase for young drivers like Rosberg, Hamilton, Heikki and Nelson in the past two seasons. At Renault, we think the young drivers guys their chance. We did it once before with a Spanish kid named Alonso, and it turned out pretty well. Now, the challenge is to do it again.