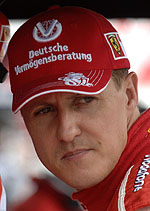 Although we are in the midst of a scintillating battle for both World Championship titles, attention remains firmly focussed - for the most part - on the future of Michael Schumacher, who comes to Monza seeking his fifth Italian Grand Prix win.

Although Ferrari has been saying for some time that the German's decision will only be made public after this weekend's race, speculation continues to build, with various sources coming up with all manner of wild and wonderful scenarios.

Speaking ahead of this weekend's big race, Schumacher made it quite clear that he refuses to discuss the matter, to give the merest hint, until after Sunday's 53-lap event.

"I understand that the announcement arouses some interest," he joked, "however, we have already made known that the declaration will be made after the race as we want to focus on what is an important date.

"I am in full agreement with this," he added. "I can only add that I will not discuss the subject until Sunday."

Meanwhile, at a time when many are slowly coming round to the idea that the German is preparing to quit, especially in wake of Renault announcing its non-Raikkonen driver line-up for 2007, Schumacher's spokesperson Sabine Kehm appeared to suggest that the media should hold back on the career summaries and tributes.

"It is absolutely fair for the media to offer an opinion or speculation," she said, according to The Guardian, "but we are sticking with our position that there will be no indication about Michael's future plans until after the race.

"We will stick to the programme," she continued, "but while some people are writing that he is definitely retiring, it's worth adding that only a couple of weeks ago many newspapers were running big stories saying absolutely the opposite."