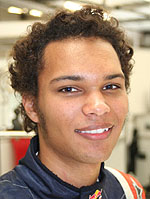 A1 Team South Africa has signed 19-year-old Red Bull Junior Team driver Adrian Zaugg for the 2006/07 A1GP season, which begins with the A1GP Zandvoort, the Netherlands on October 1.

Zaugg (right), who lives in Cape Town and is currently competing in Europe in the Italian Formula Renault Championship and the World Series by Renault, will join 21-year-old Stephen Simpson in Team South Africa.

Ms Dana Cooper, CEO of A1 Team South Africa, expressed her delight at acquiring the services of the exciting new prospect.

"Adrian Zaugg is a truly wonderful 'find' for South Africa. He is a very talented, committed young man who has already achieved a great deal in motor sport in a short space of time. We have had our eye on him for some time and are delighted he has agreed to join our team.

"We are also very appreciative to his sponsor Red Bull for allowing Adrian to compete for South Africa in at least three A1GP races, to fit in with his various Red Bull commitments."

After two days of official A1GP testing at Silverstone circuit in Northamptonshire in England this week, in which 20 of the national teams expected to contest this year's A1GP series took part, Zaugg earned his place on the team with an impressive performance in his first official outing in the 3,5-litre V8-engined A1GP car.

"All of the drivers we tested did a good job and I can honestly say that any one of them would be an asset to our team," said A1 Team South Africa technical and sporting manager Mike Carroll.

Zaugg is a previous winner of the Formula BMW scholarship. He only started racing six years ago when his Swiss father bought him a kart. He earned a place in the Red Bull Junior Team driver programme in 2005 and has been competing under the South African flag in the Italian Formula Renault championship, in which he is currently lying second. He also made his debut in round six of the World Series by Renault at the Nurburgring in Germany, finishing sixth.