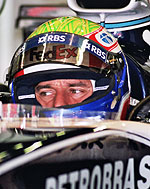 Mark Webber has echoed comments made almost exactly a year ago by David Coulthard, calling for improved safety standards at Formula One tests.

Speaking to Autosport magazine in May 2005, Coulthard said: "There is a real concern within the GPDA to look at how we can go about improving safety standards in testing. We feel that there is no reason to have a distinction between when we go grand prix racing and when we go testing. The speeds are the same, the tracks are the same, but the safety standards are not.

"We're running more laps than ever and that leads to fatigue in the driver and within the team," he added. "And testing, by its very nature, relies on cars using previously untried components and tyre developments. They are bound to be more prone to breakages."

A few days later, Pitpass exclusively reported that similar fears had been expressed in 2000, by a group of race marshals who had gone on to form their own company (Safetrack Fire and Medical Ltd). Spokesperson, Susan Morris, revealed that in October 2000 a presentation had been made to the FIA Research Group in Paris, in the presence of Professor Sid Watkins, Chief Medical Delegate, and Charlie Whiting, FIA Formula One Race Director and Safety Delegate.

"Whilst the presentation was well received, and both Professor Watkins and Charlie Whiting wished them well with the project, they felt that it was up to Safetrack Fire and Medical Ltd to make contact with the teams and circuits rather than have the FIA take a lead in the matter," said Ms Morris.

"We had already written to all of the teams in 1999 but received replies only from Ferrari, McLaren, Stewart and Williams," she revealed. "All were supportive of the idea but felt that it was either an FIA issue or the responsibility of the circuits.

"The difficulty of getting all the teams involved, together with the test circuits appeared insurmountable, especially when a second tyre manufacturer entered F1 and the overall number of test sessions increased. Then, following 9/11, marketing budgets and sponsorship dried up and, reluctantly, the project was shelved.

"That David Coulthard is having to voice his concerns five years after we attempted to rectify the situation is shameful," she concluded.

Speaking at the Nurburgring, ahead of this weekend's European Grand Prix, Mark Webber has once again raised the issue, revealing that a meeting will be held with team bosses before next weekend's Spanish Grand Prix.

"We are a decade behind where we should be," Webber told reporters. "All the improvements the FIA have done, in terms of the circuits and the cars, are great but the thing we are missing, the last ingredient, is the medical backup at tests. It's nowhere near the level of races.

"Testing is probably the most dangerous part of our job because we are testing new things," he added, a sentiment expressed by Coulthard a year ago: "Testing, by its very nature, relies on cars using previously untried components and tyre developments. They are bound to be more prone to breakages," said the Scot.