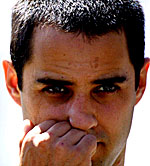 During a promotional trip to New York, Juan Pablo Montoya gave his view of events at Montreal on Sunday, and concluded that he is forever being picked upon by race stewards.

"Over the years, every time something happens, I get a big penalty, a big everything on me," said the Colombian, according to Reuters. "It's a little bit unfair, but it's their decision and you have to respect it. You have to deal with it."

"Whether you like it or not, that's what it is," he added.

The McLaren driver was black-flagged (disqualified) from Sunday's race, for leaving the pitlane - during a safety car period - when the red light was on, indicating that the pitlane was closed. Earlier, in a controversial move, his team failed to call him in before teammate Kimi Raikkonen - once the safety car had been deployed - even though the Colombian was leading the race. Team boss Ron Dennis subsequently admitted that this had been a "mistake".

Rejoining the race, there was initial concern that the former Indy 500 winner had (illegally) overtaken David Coulthard, however this was academic as he had left the pitlane illegally.

This weekend, Montoya heads to Indianapolis, where twelve months ago he was again black-flagged, this time when his crew was found to be working on his car (on the grid) within fifteen seconds of the formation lap. A week earlier, he and his teammate had been excluded from the results of the Canadian GP for running with illegal brake ducts.

Referring to last weekend's race, Montoya said: "Of course, it would be nice to have the win, but I'm happy that I'm competitive.

"When you make a mistake you've got to be part of the team," he added.

Referring to the incident which saw him black-flagged in Montreal, he said: "When I resumed with the pace car I was a bit surprised because I saw there was a red and a flashing blue beside it so I kind of slowed down.

"I went to ask the team it's kind of strange if they're going to stop me that I have to stop in the pit lane, so I just continued and they said 'you're probably going to get a drive-through penalty'.

"For some reason the FIA decided to disqualify me, they've been pretty tough on me."