Rubbing their noses in it 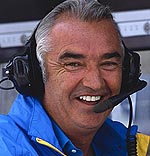 Although some, including Fernando Alonso, would say that Renault 'lucked' into Sunday's race win at the Nurburgring, team boss Flavio Briatore was having none of it.

A week after a disappointing race at Monaco, where Alonso had struggled with his tyres, unable to hold off the attention of the two WilliamsF1 drivers, and doing all he could to keep Juan Pablo Montoya at bay, Renault was back on the pace, and atop the podium.

Asked by reporters if he sympathised with Raikkonen and McLaren's plight, Briatore didn't pull any punches.

"Did anyone show any for us in Monaco?" he asked.

"No. Some people want to win the race on Fridays and Saturdays," he added. "The race is not over until four o'clock on Sundays. When I looked at my watch, Alonso was the winner.

"We did our job," he continued. "We chose the right tyre, we ran with more fuel than anybody and Alonso did the fastest lap.

"We put pressure on McLaren throughout the race."