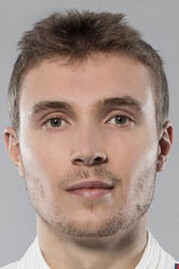 Sergey's motor racing career, as is ever the case, began in karting, though at the relatively late age of 13. Over the next two years he worked his way up through the ranks before switching to single-seaters shortly after his 15th birthday.

Opting for the newly created Formula Abarth series in Italy with Jenzer Motorsport, Sergey finished in the points on his debut, the youngster scoring points in four further rounds to end the season 18th in the championship.

He remained in Formula Abarth with Jenzer in 2011 as the series split into two separate championship classifications for Europe and Italy. However, ahead of the round at Spa Sergey left Jenzer for Euronova Racing by Fortec.

Winning the European series courtesy of five wins from fourteen races, he finished runner up in the Italian championship with two victories. Ironically, he lost the Italian series to former (Jenzer) teammate Patric Niederhauser after making a mistake in the final race at Monza.

Sergey remained with Euronova in 2012, contesting both the Auto GP World Series and the Italian Formula Three Championship.

On his Auto GP debut (Monza) he qualified second behind Adrian Quaife-Hobbs but stalled at the start. In the second race however, he finished fourth and also took pole position, as he did in race one.

At the next round (Valencia) he started behind Quaife-Hobbs yet again, but this time passed him before the first turn and went on to win - once again posting the fastest lap and becoming the youngest ever Auto GP winner.

Over the course of the season Sergey posted four consecutive fastest laps, thereby breaking the record held by Romain Grosjean, going on to finish third in the overall championship.

In Italian F3 he scored wins at the Hungaroring and Monza, and a further four podium finishes over the course of the season. Indeed, he scored points in twenty-two of the twenty-four races, eventually finishing the season fifth in the European series and sixth in the Italian.

Other than Auto GP and Italian F3, Sergey also found time to contest the Moscow Raceway round of the Formula Renault 3.5 Series, finishing the first race in twentieth and retiring from the second.

For 2013 he chose to contest the full Formula Renault 3.5 series with ISR, however, from 18 races he only scored two podium finishes, ending the season a distant ninth, over 200 points behind championship winner Kevin Magnussen.

However, it wasn't all bad news in 2013, in mid-July Sergey came to the attention of F1 fans when it was announced that Sauber was putting in place a development programme aimed at preparing him for a seat in the 2014 world championship.

The news came in a statement in which the Swiss team, known to be in financial difficulties, announced a partnership with the Investment Cooperation International Fund, the State Fund of Development of North-West Russian Federation and the National Institute of Aviation Technologies (NIAT).

By an amazing coincidence, Sergey happened to be the son of the head of NIAT... though we were informed the relationship between Sauber and the Institute was purely technical. Of course it was.

A month later, Sergey paid his first visit to Hinwil and a month after that made his debut in an F1 car, driving the Sauber in a demo event at Sochi, home of the 2014 Winter Olympics and the inaugural Russian Grand Prix scheduled for a few months later.

On 21 December, Sauber confirmed Sergey as its test driver for 2014, with the aim of preparing him for his F1 debut.

"We have been working with Sergey since August," said team boss Monisha Kaltenborn, "and he has been able to gain more and more insight into Formula One. Now he is taking the next step towards the top level of motorsport in his new role as a test driver. Our experience of him is as a very focused, calm and talented driver. Now we will continue to support him, including obtaining his super license. Our goal remains to prepare him for a debut in Formula One."

Other than the blip that was his 2013 Renault 3.5 series campaign, Sergey appears to have talent and pace… whether he has enough for F1 remained to be seen.

It is a cold, hard fact of life that these days money talks a lot louder than talent in F1 and as the sport continues to look east, towards the rising economies, what a yungster lacks in skill can be more than outbalanced if you have enough dollars, roubles or yuan.

Sergey only ever got to dive the C33 once in testing - following the Bahrain Grand Prix - though he did participate in FP1 at Sochi. Other than that, that was it.

Following his disappointing Renault 3.5 series campaign in 2013, Sergey finished a more impressive 5th overall in 2014, albeit 95 points down on champion Carlos Sainz Jr.

Retained by Sauber, Sergey took part in the Bahrain pre-season test, completing 75 laps and finishing the day 8th quickest. Having completed the necessary mileage for his superlicence, the Russian contested the Friday practice at his home race a few months later.

With Sauber announcing an all-new driver line-up for 2015 it remained to be seen whether the Swiss outfit might seek to keep Sergey (and his money) on board, though the early signs were not good.

Finishing the 2015 GP2 season third overall with Rapax, for 2016 he switched to ART Grand Prix while also joining the newly established Renault F1 team as "development driver" a role that saw little live action only countless hours in the simulator.

That said, Sergey contested the Friday sessions in Sochi and Brazil, while his GP2 exploits saw him finish third overall for the second season running.

Retained by ART for the re-named F2 championship, Sergey had a difficult season, finishing the year 20th overall scoring just 9 points over the course of the year, while teammates Nobuharu Matsushita and Alexander Albon finished 6th and 10th.

In addition to F1, Sergey took part in the post Bahrain and Abu Dhabi tests with Renault as well as four FP1 sessions, even finding time to contest the Le Mans 24 Hours with SMP Racing, finishing 16th in class and 33rd overall.

Towards the end of 2017, at a time Robert Kubica was involved in a shoot-out with Paul di Resta for the Williams seat alongside Lance Stroll, some sections of the media claimed that Sergey was also under consideration.

On 16 January, Williams confirmed that Sergey would indeed partner Stroll, and while the Grove outfit insisted the deal was all about the Russian's talent, most believed it was more about the sizeable sponsorship package he brought.

Previously, Sergey has done little to convince. However, providing Williams could give him a decent chassis that might change. With many still unsure of Stroll, the Russian would also have a basic benchmark by which to measure himself.

Unfortunately, so poor was the FW41 - a fact which seemingly became apparent to the team on the first morning of testing - that it would be wrong to judge either Sergey or Stroll on the basic evidence.

That said, the Russian clearly has one-lap pace, for over the course of the year he out-qualified his teammate 13-8. However, on Sunday afternoons it was usually the Canadian who did the better job, mainly courtesy of his superb starts.

Qualifying a strong 13th in Monaco, he went one better in Azerbaijan, Germany and Italy. In the Principality however, he was sidelined on the first lap following clashes with both Perez and Alonso. In Germany he was eliminated by an oil leak while at Monza he finally brought his car home in the points, albeit behind his teammate.

With Stroll heading off to join his father's team, along with his money, it was thought that Sergey's backing would help him retain the Grove seat, despite pressure to put Ocon in there.

However, having already obliged Mercedes by recruiting protege George Russell, the Grove outfit opted to partner him with Robert Kubica who had been test and reserve driver in 2018.

While the absence of Sergey on the 2019 grid would not be as noticeable as that of Ocon, it seemed harsh that, given the shortcomings of the FW41, we were unable to get a better idea of his talent, after all, he is clearly quick.

At season end, Sergey took part in a test with Audi Sport's DTM team, while he was also set to make at least two FIA World Endurance Championship outings with the SMP Racing LMP1 in 2019, replacing Jenson Button, who was skipping the Sebring and Spa races due to clashing Super GT commitments.

Having made his Le Mans debut in 2017 in an SMP Racing Dallara LMP2 car, finishing 16th in class, it was expected he would return in 2019, albeit in an LMP1 car.

In January 2019, Sergey took part in the Formula E test with Mahindra Racing in Marrakesh, and shortly after was confirmed for Le Mans with SMP.

In late February, he was announced as Renault's third and reserve driver, along with Jack Aitken (test driver) and Guanyu Zhou (development driver).

Though he wasn't classified at Sebring, at Spa he finished 4th, two of his three WEC outings for SMP. He subsequently failed to finish at Le Mans, but on a brighter note it was subsequently announced that alongside his Renault duties Sergey would be reserve driver for McLaren.

In a little bit of F1 history, Sergey was the first driver to complete a test using the 18 inch tyres proposed for the 2021 season, though whether he's in F1 to actually use them in race conditions remains to be seen.