No lap time advantage from the fans, bemoans Verstappen 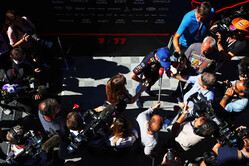 Delighted to be racing in front of his beloved Orange Army, Max Verstappen expects an altogether tougher weekend than Spa.

While he virtually cruised to victory last weekend, leaving rivals mystified and speechless, Max Verstappen is aware that this weekend the very nature of the Zandvoort track and the anticipated weather conditions will make such domination almost impossible.

Though he is racing at home in front of his beloved Orange Army - for the first time as reigning world champion - the youngster is all too aware that this doesn't give him a genuine advantage.

"It's an amazing track, I think, with a Formula 1 car, especially on a qualifying lap," he said as the weekend got underway.

"Amazing atmosphere," he continued, "there will be a lot of orange around, so again, looking forward to the weekend.

"Unfortunately, there's no lap time advantage," he laughed, "but it's definitely nice to see all the time. When you are even in the box, you see the people in front of you, they are having a bit of a party going on, and when you drive out as well they are cheering for you, and I'm just going to try and enjoy it as much as I can."

Looking ahead to the weekend, he said: "Spa was amazing for us and I think also better than expected. I think our car, with the layout, it suited the car really well.

"Here you run a lot of downforce on the car as well, completely different track layout, less straight-line speed as well.

"I'm sure if we nail our car set-up it's going to be quick," he added, "it's just going to be a bit of a question mark as to how quick it will be compared to the others."