Sainz: Why would you risk it? 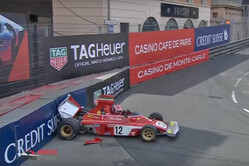 Unlike his teammate, Carlos Sainz admits that he has no desire to drive a historic F1 car any time soon.

Over the Silverstone weekend, Sebastian Vettel delighted race fans - and himself - when he ran a number of demonstration laps in Nigel Mansell's 1992 championship winning FW14B.

Weeks earlier however, Charles Leclerc suffered a brake issue whilst driving Niki Lauda's 1974 Ferrari 312B3 during a historic race at Monaco, the youngster spinning backwards into the barriers at Rascasse and crumpling the car's rear wig in the process.

Understandably, Carlos Sainz is in no rush to follow his teammate's example.

"I had the opportunity to in the past," said the Spaniard, when asked if he had the desire to drive one of his team's historic cars. "It always gives you a vision of how the sport was a long time ago.

"I'm in two minds with it because why would you risk it?" he added. "Like, why? You're in the middle of a Ferrari championship-winning chance. Why would you risk having this situation like happened to him?

"At the same time, when else are you going to have this opportunity to drive these cars?" he admitted. "So, every time I jump in a classic Formula 1 car, I have these things in my head. If I'm jumping in a car, I'm going to push it. I don't know how to jump in a car and put the elbow out and drive around. I have no idea how to do this.

"I can only jump in and feel it and feel how these cars felt, so every time I'm going to jump in, I'm going to push the car. And these things can happen."