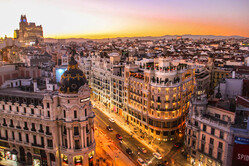 A cabinet minister in Madrid has written to F1 boss, Stefano Domenicali expressing interest in holding a race.

The city has previously played host to the Formula One World Championship, the Jarama circuit having hosted the Spanish Grand Prix on 9 occasions between 1968 and 1981 - alternating initially with Barcelona's Montjuic circuit - together with non-championship races in 1967 and 1980.

It is not clear where the race would take place, Jarama would appear to be out of the question since it would require a massive upgrade, and though the local government of Morata de Tajuna, previously announced that it was seeking to build an FIA Grade 1 circuit, it is clear that the sport's management is focussing on street tracks - just check any of its scintillating promotional videos.

"It is my pleasure to write to you on behalf of the government of the Community of Madrid to express our interest in the development of a Formula 1 Grand Prix in Madrid," writes local government cabinet minister, Enrique Lopez in his letter to Domenicali.

"I believe that holding in Madrid a motor racing event, which is one of the most exciting sporting phenomena of our time, would be a success for all the professionals, institutions and companies involved in the development of Formula 1.

"Of course, it would also be a satisfaction for the whole region and its citizens. That is why the Government of the Community of Madrid has the greatest interest in making it possible.

"In short, I would like to confirm our commitment to you and to this project, as well as our willingness to sign the appropriate agreements to promote the race and offer a great sporting and entertainment spectacle.

"We are ready to work with you and your team to bring Formula 1 to Madrid."

Of course, the bid comes at a time the Barcelona organisers are in hot water with F1 bosses for issues surrounding the recent Grand Prix, which they have been ordered to fix.

Furthermore at a time F1 is seeking to pour more money into its coffers, a warning shot across the bow of one of several (European) races under threat, coupled with the long-term contracts being offered elsewhere and the eagerness of new hosts to take advantage of the sport's current "boom" is a sure-fire way of having one's demands met.