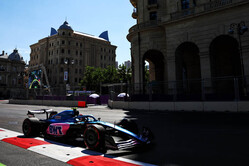 Track evolution, fresh rubber and avoiding yellow flags proved key around the 6.003km Baku City circuit today, with drivers aiming to log multiple laps in their Qualifying runs. For Q1, Fernando and Esteban put in some early lap-times that saw them both in and around the top ten positions. In the end, the pair progressed comfortably out of Q1 in tenth and twelfth despite a red flag delay towards the end of the session which left very few drivers with improved lap-times at the chequered flag.

In Q2, both drivers initially used a set of Softs, with Fernando slotting into eighth and Esteban twelfth. Multiple yellow flags were waved on their second push laps, and again at the end of the session on a new set of tyres. Esteban was an unfortunate victim of this on his fast lap and therefore exited Q2 in thirteenth, whilst Fernando made it into the top ten shoot-out for the sixth time this year in ninth position.

For Q3, Fernando slotted into ninth on his first attempt on used Softs and although he improved on a new set of Softs later in the session after logging a lap time of 1min 43.173secs, he finished up in tenth on the grid for tomorrow's 51-lap race.

Esteban Ocon: "Obviously I'm disappointed given it's the second race in a row that yellow flags in Qualifying prevented us from completing a solid lap to get us well into the top 10. The pace has been there all weekend so it's frustrating not to put it all together today. But we know that overtaking is common here, and Baku is one of the most unpredictable circuits on the calendar on race day. We'll need to take the opportunities that present themselves and there is no reason why we cannot end our weekend with some good points for the team."

Fernando Alonso: "I am happy with the day even though we were maybe expecting more after showing decent competitiveness yesterday. We seemed to lose some of that competitiveness today so we need to look into that together. There was a lot of frustration for everyone at the end of Q1 and I understand some of the complaints, but a lot of cars were making mistakes that caused yellow flags, with a lot of cold brakes and tyres after everyone was trying to take track position. We even saw some drivers hitting the walls and when I went wide there was nothing I could do. It will be a challenging race, and anything can happen here in Baku. The points are scored tomorrow and I'm looking forward to see what we can do especially with our lower downforce setup."

Otmar Szafnauer, Team Principal: "Qualifying was a bit disappointing as we anticipated that both of our cars would have made Q3 today. We had the car to do that but unfortunately the circumstances were such that we were out on track when we got caught out by the yellow flag which meant that Esteban didn't get his fast lap in. He was significantly up on his other lap so he would have been able to make it through to Q3. We must now focus on tomorrow and get ready for a race in which we will look to maximise every opportunity."