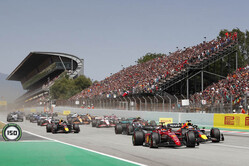 Red Bull boss, Christian Horner has warned unless the budget cap is increased some teams could be forced to miss races.

There was much mutual back-slapping when Liberty appeared to have done almost overnight what Max Mosley and Bernie Ecclestone had spent years trying to do, but with no success, the introduction of a budget cap.

For Liberty, the intention was clear, for curbing spending was a means of levelling the playing field, ensuring that essentially everyone had a chance of success not just the big guns.

Of course, even with the agreed limit - which this year is $140m and falls to $135m from next year - there remain the haves and have nots, with Haas' Guenther Steiner making it quite clear at the weekend when he admitted that his team's failure to follow the example of all its rivals and introduce upgrades in Spain wasn't about budget cap but budget.

Initially, it was intended that when the budget cap was introduced (in 2021) it would stand at $175m but following discussions which led to a number of exemptions such as driver salaries and those of 'leading team members, marketing and so on, it was reduced to $145m.

The first sign of dissent was when a number of teams argued against the increase in the number of Sprints, claiming that rather than 'compensation' payments for damage incurred at these events the budget limit should be increased. Of course, as has always been the nature of F1, some teams were against this.

Then, as the season got underway, and teams sought to get down to the weight limit, they were divided on how they should go about this, admitting that every trial - and error - would affect their spending.

Now, of course, as the championship fight develops, the bigger teams want to be able to spend more in order that they can continue to introduce upgrades with which to beat their rivals... while the smaller teams, those with no hope of reaching the limit, far less exceeding it, sense the possibility of some giant killing as their bigger rivals hit the spending ceiling.

As was always the case in F1, this has led to a certain amount of huffing and puffing from the bigger teams, the latest example being Christian Horner who warns that unless the cap is raised some of the bigger teams may have to 'sit out' races.

"Seven of the teams would probably need to miss the last four races to come within the cap this year," warned the Red Bull boss, according to the BBC.

"It's not just about the big teams. It's teams in the middle of the field who are really struggling with inflationary issues," he added.

So, it's not about the need to continue upgrading the car and thereby beat Ferrari - and possibly Mercedes - no, it is about the cost of living crisis that most of us are currently experiencing.

The FIA has a duty of care," he insists. "I know they are taking it seriously. Energy bills, costs of living, costs are going exponentially, and F1 is not exempt. Freight has quadrupled and that's not something we can control."

At the recent meeting of the F1 Commission Alfa Romeo, Alpine, Haas and Williams understandably voted against the proposal that the cap be adjusted based on the International Monetary Fund's inflation figures.

"We've set our budgets early, we kind of anticipated a little bit of the inflation," explains Alpine's Otmar Szafnauer. "Inflation didn't just creep up on us. If we can do it, for sure others can do it too. I'm not for just increasing the cap.

"What that then does is it limits your development. So it's a lot easier, if you have the money, to go to the FIA and lobby to raise the cap and keep your development budget the same."

Of course, Horner's 'threat', other than the potential of a major row between the teams, the FIA and F1 - the like of which Liberty hasn't really encountered up until now - raises some interesting possibilities in terms of the sport's owner's increasing demand for 'soap opera' levels of entertainment to fit the Netflix narrative.

Other than Guenther Steiner effing and blinding at the thought of the limit being raised, imagine the TV drama as Red Bull, Mercedes and Ferrari are forced to miss races towards the end of the season... the anticipation of their rivals gaining an edge... the possibilities of the likes of Haas or Williams benefiting and winning a race or two.