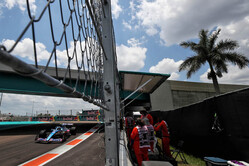 BWT Alpine F1 Team endured a disappointing Saturday ahead of this weekend's Miami Grand Prix as Fernando Alonso qualified eleventh on the grid for tomorrow's debut race. Esteban Ocon unfortunately missed Qualifying as a result of a damaged chassis following a heavy incident during Free Practice 3.

In Qualifying, Fernando looked to carry on the strong pace he had set so far this weekend, including his fourth place in today's FP3.

The Spaniard went through Q1 and had the pace to progress into Q3. He was unfortunate not to qualify any higher on the grid after a promising lap in Q2 was compromised by traffic. In the end, he missed out by 0.032secs to progress to Q3, meaning he will start tomorrow's race from eleventh on the grid.

On an early push lap in FP3, Esteban lost control of his A522 at Turn 17, colliding with the outside barrier. The damage sustained to his car cracked the chassis and another one will be used for tomorrow's 57-lap Grand Prix.

Esteban Ocon: "I can only apologise to the team for today as it's never a good feeling when you crash. The whole team has been working so hard to have the car in a good place, so it's disappointing not to be able to see the true potential in Qualifying. It was a big hit, so I was a bit shaken but thankfully I'm fine. We'll have to look into what can be done to make the barriers safer as Carlos was also quite shaken up after an almost identical crash yesterday. As always, safety has to be the priority. For now, we'll focus on getting the car back up and running and debriefing the day before going out there tomorrow with nothing to lose and everything to gain."

Fernando Alonso: "The car felt good today, so it's disappointing to be starting tomorrow's race in eleventh. In Q2 I encountered traffic on my final lap with Carlos [Sainz] in Turn 11, and by Turn 16, I'd lost about five tenths of a second, so my lap was ruined. We had fitted a used set for the first run in Q2 and saved the new tyres for this second attempt. However, this loss of time made it impossible to progress to Q3, which is again unfortunate for us. I think we could have been fifth or sixth today, but we're not. Let's see tomorrow, as that is when the points are available this weekend."

Otmar Szafnauer, Team Principal: "It's a disappointing Qualifying session today, especially as we have so much pace in the car, which we were not able to truly show. The result is not an accurate reflection of our actual performance as Fernando should really be inside the top ten, at the very least, with his lap in Q2 absolutely compromised by traffic. I'm not sure what Carlos [Sainz] was doing but Fernando was on a fast lap, while he was on track driving slowly and, ultimately, this cost Fernando time. It was unfortunate for Esteban to crash in Practice, especially in a place where there's a solid barrier. It was a hard hit, and the chassis was irreparable with not enough time between the sessions to make the required chassis change. While today we feel frustrated, tomorrow is a new day, and we will fight again."