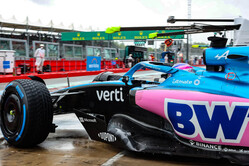 BWT Alpine F1 Team will line-up for Saturday's Sprint Qualifying with Fernando Alonso in fifth and Esteban Ocon in nineteenth after a rain affected Friday Qualifying session in Imola. The result sees Fernando score his best qualifying result of the season, while Esteban had an unfortunate session and exited Q1 after a gearbox issue.

With rainfall hitting the track for most of the morning, Q1 rather surprisingly got underway in drying conditions. Opting for Softs, Fernando ran smoothly and progressed into Q2 in ninth. Esteban unfortunately dropped out of qualifying after a gearbox issue meant he couldn't complete his final timed lap and he ended up in nineteenth.

For Q2 and still under dry conditions, Fernando positioned himself in sixth before a red flag delayed proceedings. During the interlude, a heavy bout of rain hit the circuit meaning that nobody could improve their lap time once the session resumed and Fernando went through to Q3 to keep up his perfect record in 2022 of reaching the top ten shootout.

With rain continuing to fall, Intermediates were required for Q3 and Fernando put himself firmly in the mix in fifth position on a 1min 29.202secs. Two subsequent red flags were waved, and the field was unable to complete another timed run leaving Fernando fifth and on the clean side of the grid for the first Sprint Qualifying of the season tomorrow.

Esteban Ocon: "Our qualifying ended early, so that was a tough way for us to end the day. We've had a suspected gearbox issue, which is why I couldn't complete the lap in Q1 and we pitted straight away. We will be looking closely at what happened. Up until that point, the car felt good so it's going to be all about getting it back for tomorrow in the Sprint and for Sunday's Race. Still, there are two races to go this weekend, with potentially some rain as well, so there are still some opportunities to save our weekend. Let's see what happens."

Fernando Alonso: "It feels good to be in the top five after a messy qualifying with all of the changing conditions and red flags. With the wet weather changing the track all the time, anything can happen, so overall I'm pleased to be in the top five for tomorrow. The car felt fast in the last two rounds and I feel quite comfortable with the car here. Let's see how we do tomorrow as there are points on offer in the Sprint and for the race on Sunday."

Alan Permane, Sporting Director: "We're left with a bittersweet feeling after tonight's Qualifying as, unfortunately, the team faced mixed fortunes on either side of the garage. Esteban's car had a gearbox failure in Q1 and we'll fully investigate how that occurred. As we saw with Fernando, the car had strong pace today, so it's disappointing that Esteban was not able to show his true potential, especially in conditions where we've seen him shine in the past. On Fernando's side it was a relatively straightforward session. The car had good pace in both the wet and dry and Fernando was happy with the car's balance across all conditions. He will start in fifth tomorrow on the clean side of the grid and that's a very good place to begin the Sprint. Esteban, with a quick car, will certainly have an opportunity to make up some places, so his weekend is definitely not over. We'll be doing our best tomorrow in the Sprint to set ourselves up for Sunday's Race."