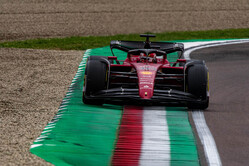 Ferrari boss, Mattia Binotto has defended the decision to call Charles Leclerc in for a late switch to the soft tyres.

Pitting from third on Lap 49, by switching to the red-banded rubber the Monegasque was soon able to overhaul Lando Norris on his old mediums.

However, it was his self-confessed "greed" that saw the Ferrari driver make a mistake whilst in pursuit of Sergio Perez for second, that was to end in disaster.

Explaining the decision for the late stop, which prompted the Red Bull drivers to follow suit, Binotto claims it was the only way the team could see Leclerc being able to overhaul Perez.

"At that time maybe of the race, the pace with Sergio Perez was very, very similar, or slightly better," said the Italian.

"But because we believed that there was no opportunity for us to attack and overtake Perez with those tyres anymore, we did the pit stops to try, to hope at least, that they would have stopped as well."

Though it ended in disaster, with Leclerc eventually crossing the line in sixth, Binotto doesn't blame his driver.

"There will be never regret to ask a driver to push," he said. "That is part of our job. It's part of their job, to try and drive to the limit. Obviously mistakes may happen."