One of our better days, says Norris 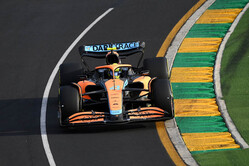 While refusing to get carried away, Lando Norris admits that Friday was one of his team's better days, though the improvement could be track specific.

Much like Mercedes, the problems encountered in pre-season testing have continued into the season, leaving McLaren well off the pace if its rivals.

While the Woking outfit hasn't encountered the porpoising that has compromised its Brackley-based rival, ongoing brake cooling issues have had drivers Daniel Ricciardo and Lando Norris struggling.

However, on a day that the Woking outfit's Executive Director, Andrea Stella claims the team has taken a "small step forward", Norris admits that this has been of the better days.

"Today was one of our better days so far this season," said the Briton, who finished the day eighth fastest. "It was probably our best Friday so far, so I'm hoping it will continue tomorrow because we have a good feeling.

"We've made a few changes," he continued, "and we have learned a bit this weekend from the previous two weekends that we have implemented. It's working reasonably well.

"We started off the day well with a good balance and just made further improvements, moving in a decent direction. It wasn't amazing, but it was decent.

"We are extracting everything out of the car," he insisted, "and I think we are doing a good job. It's a small step forward, so it is a good start, and hopefully we can continue that into tomorrow and make further improvements."

However, the youngster admits the improvement could be track specific.

"So far it looks similar to Jeddah, which is a good thing for us, because that was a decent weekend," he said. "It's just the track, but of course there'll be some little things that we are improving.

"A little is maybe one tenth," he admitted. "It's not going to make us half a second quicker, or one second. But a lot of what you are seeing is just the track, which is a good thing. Hopefully Bahrain was just a very bad one.

"I think we have understood a little bit more and hopefully more of the tracks are like here and Saudi. We are going in the right direction, but we are still a long way off."