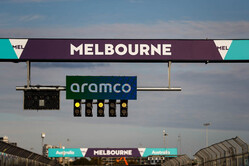 In its preview of this weekend's Australian Grand Prix, Alfa Romeo refers to the 2020 event as "the race that never was".

While this epithet could apply to any one of the races cancelled or rescheduled due to the pandemic, or even the controversial 'rained-off' 2021 Belgian Grand Prix, who can forget the sight of fans arriving at the gates on that fateful Friday morning, only to be told to return home as there was not going to be a race.

Just one hour before opening practice, a member of the McLaren team tested positive and in no time at all the event was cancelled. Indeed, as fans were still arriving and the media being informed of what was happening a number of drivers had already left the track and were in the process of heading home.

While Grand Prix weekends are now reduced to three days, the long trip 'down under' means the teams and drivers have to accept various promotional duties, most of which usually involve Koala Bears or Kangaroos.

One mammal that Mercedes will be keen to avoid is the porpoise, not the lovable creature one finds in the sea of course, but rather the ground-effect phenomenon which has been compromising drivers Lewis Hamilton and George Russell this season.

The fact that the seven-time world champion failed to make it into Q2 last time out in Saudi Arabia probably tells you all you need to know, whilst his teammate insists that solving the porpoising will resolve around "99%" of the car's issues.

Last time out, as was the case in Bahrain, we were treated to a wonderful cat and mouse scrap between Charles Leclerc and Max Verstappen.

Whereas the Dutchman was to be sidelined by a technical issue at the season opener, he scored a victory at Jeddah after using every trick in the book, including some wily use of the DRS rules, to open his 2022 account.

Their respective teammates were able to show that both Red Bull and Ferrari have good cars, though if they are to challenge for the drivers' title both will have to up their games.

With Mercedes currently down to damage limitation, Russell did well to finish fifth, while teammate Hamilton struggled to take the final point for tenth.

Having been hit hard in qualifying, one wonders what went through the Briton's mind as he spent the following afternoon battling - and losing to - the likes of Kevin Magnussen in the Haas.

One of the true highlights of the Jeddah race was the battle between Alpine teammates, Fernando Alonso and Esteban Ocon, one which must have surely given team boss, Otmar Szafnauer, a few heart in mouth moments.

Eventually the Spaniard succumbed to a water pump issue, though the team has assured us that the pair will be allowed to continue to fight.

Having missed the first two rounds after testing positive, Sebastian Vettel makes his 2022 debut this weekend. That said, going by the form of the Aston Martin in the previous two races he may well wish he hadn't bothered.

Having shown good pace in the opening races, following Mick Schumacher's crash in Jeddah Haas has no spare car this weekend, so both drivers are going to need to exercise a certain amount of caution.

If the revamped Albert Park lives up to expectations, we could be in for a cracker this weekend, with battles aplenty throughout the field.