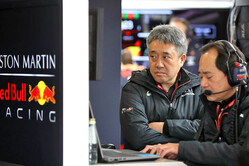 Former Honda boss, Masashi Yamamoto is act as a consultant to Red Bull Powertrains as the Austrian company prepares to build its own engines.

We have established a new company," Yamamoto tells Motorsport.com. "We want to do something that makes people happy, and if we win in F1, then fans will be happy with that.

"We've signed a contract with the company at Red Bull Powertrains," he adds. "The company has me, at the request of Red Bull's Christian Horner and Helmut Marko, to support them. It's a contract between companies, so it's difficult to speak about details, but as one of the members of Red Bull Powertrains, I will undertake work that will help them."

He explains that as the Austrian company takes on the huge task of becoming a manufacturer, it can continue to benefit from the experience of its former supplier.

"If, for example, they want to understand Japanese culture and Honda's culture, and have a closer and better relationship with Honda, we can support it. Basically it's a bridge between Red Bull and Japan," he explains, revealing that he made the decision to leave Honda, where he was managing director of its F1 programme, in the wake of the company's announcement that it was to leave the sport.

"I decided that in March of last year. I was appointed director of motorsports in 2016, and my goal was to win the Super GT championship at first. I was able to achieve that in 2018. For the next three years, I was dedicated to F1. From the beginning, I thought that this work was the culmination of my life at Honda and I thought I could make use of everything I had experienced there.

"I was wondering if we could win with Red Bull for the first time in the first year, and then have a good championship fight with Mercedes in the second year. But that wasn't the case. But, in the third year, with Verstappen's driving ability and the strong Red Bull team we managed to win the championship."