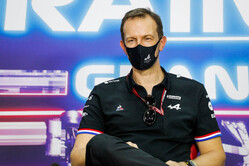 Confirming his split with the French team, Alain Prost talks of jealousy and an almost toxic atmosphere at Alpine.

Taking to social media to confirm that he has parted company with Alpine, four-time world champion, Alain Prost, arguably one of the sport's finest drivers, subsequently told French media of the problems within the team.

"I am very disappointed how this news has been announced today," he wrote on Instagram. "It was agreed that we would announce together with Alpine F1 Team! No respect, sorry!

"I have refused the offer made to me in Abu Dhabi for the 2022 season because of a personal relationship and I was right!" he added. "To the Enstone and Viry team, I will miss you."

In addition to being "sidelined", he claims that under Laurent Rossi (pictured), who was appointed CEO of Alpine, reporting directly to Renault CEO, Luca de Meo, in January last year, the atmosphere, certainly as far as he was concerned, has become toxic.

"Rossi's desire is to be alone, not to be polluted by anyone," Prost tells L'Equipe. "He told me he no longer needed advice.

"There is a real desire to put a lot of people on the sidelines," he continues. "Rossi wants all the light."

Offered a new contract at the end of 2021, Prost rejected it due to the way he had been treated.

"It was a project in which I believed and in which I still believe," says the Frenchman, who describes Alpine as "an ambitious project which has restored incredible motivation at the level of the group".

"The 2021 season was very disruptive for me, in that I felt that the old ones had to go," he says of the ongoing reorganisation - of which he appears to be a victim. "I accept the change because we don't have to do F1 always the same way. We can do it differently, and that is what throughout the last year has been done.

"But for me, it became too complicated," he admits. "I was no longer involved in the decisions. Sometimes I did not even share in them at all but I had to continue to put out the official word.

"Even as a member of the board of directors, I discovered certain decisions at the last minute. One might not be able to be heard, but at least one should be warned in time. It's a question of respect. Relations became more and more complicated. I felt that there was a lot of jealousy.

"What I don't appreciate is the relationship and the lack of respect for people," he admits. "When the team boss doesn't even say hello to you when you arrive at the circuit, it's because there's no more fun. There isn't even any respect anymore. And then it just can't work."

With former Aston Martin CEO, Otmar Szafnauer linked with the French outfit, Prost believes the former Honda man will have his work cut out, revealing that the 'new' design of engine, to which Renault has devoted two year’s work, "has a little topic of reliability".