Liberty eyes a bigger slice of the F1 cake 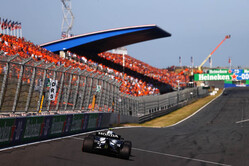 Toto Wolff's claim that these are boom times for the sport could be the equivalent of turkeys eagerly anticipating Christmas, as Liberty eyes a bigger slice of the F1 cake.

In case you didn't get the message - which is surprising because it was echoed from almost every quarter over the Austin weekend - these are boom times for F1.

"We are in a very good moment in time for Formula 1," said Toto Wolff over the US GP weekend, "because the audiences are growing, the popularity of the sport has been increasing, we are slowly but surely tapping the Americas and Stefano, with Liberty, have been doing a tremendous job. So I can only speak for ourselves, we have grown our top line considerably.

"The cost cap has brought us a bottom line and that is how sports teams should be," he added. "It shouldn't be a marketing exercise only and a cost centre. It should be a profit centre similar to what the US, American teams are and we are clearly there, and I believe, or I would very much hope that all the teams become profitable very soon and I think it is on the verge.

"You know what your costs are," he enthused. "You can't spend more than 145 million dollars this year and going down.

"Formula 1 in itself is so successful that based on the EBIT that is being distributed to the team a large chunk of that is covered by TV only, so it's a very predictable exercise. Whoever buys a Formula 1 team today knows exactly to the dot what they need to spend in order to be competitive, because we wouldn't be able to spend more, so that's why it has become a very good business opportunity on my side.

"I wouldn't sell a team," he insisted. "On the contrary, with Ineos coming in I bought an additional 3 per cent and I'm very happy about that."

"I think Liberty recognized, when they bought the sport, there was a lot of value to be created and I think we are seeing that now. The investors that are coming into the sport are serious people, that are sports investors and own significant businesses and if you look at the value of other sports franchises around the world, Formula 1 teams are undervalued and I think that is why you see people coming into it.

"So now would be a good time for a buyer to come in but there are probably not many sellers at this point, which creates a good dynamic to push up franchise value, so I think Formula 1 is in a very good position."

Of course, the so-called boom hasn't escaped Liberty's atention, so it comes as no surprise that the sport's owners are looking for a bigger slice of the cake.

"I'm very happy to see the teams do well," Liberty Media CEO, Greg Maffei told financial analysts in a conference call on Thursday after revealing the financials for the third quarter, "as I think, as I said, that was necessary for the success of F1.

"The new Concorde Agreement has some incentives, that as revenue and profits increase, we take back some of that which had been given over the last several deals," he added. "I already warned the teams to expect more demands from us, based on how much success they've had... and they smiled.

"So we'll see how those negotiations go. But I'm optimistic that we can continue to have success with the teams, as we've had over the last couple of years, and will both benefit."

Maffei says that making the teams financially viable was part of Liberty's masterplan.

"One of the important things was to help the ecosystem," he said. "You've really seen the strength of the teams do so much better.

"I appreciate all the kind words they now say about Liberty, and about F1's management," he continued. "I think that's because, guess what? The value of the teams has gone up dramatically. And we knew that was necessary, and the actions we took with the budget cap and the like, and changing some of the payouts, all were designed to create health of the ecosystem. And that's happened.

"So in many ways, the teams have gotten that success because it was necessary to make them healthy for us to get to build to the next level. The interest you're seeing from new entrants to come in and buy teams is only an echo of that success. So I think there's a lot of things that are setting up well for us.

"All those pieces about demand, all those pieces about the strength of the system, all set up well for future success," he insisted. "2022 is going to be a step up, but certainly not the last one. I think we have a long trajectory of success in front of us. I'm very optimistic."

All of which begs the question, why is Liberty even thinking of selling F1?

And as for the teams accepting that Liberty deserves a bigger slice of the cake, why, you can almost hear Bernie laughing from here.