Team bosses divided on who will claim title 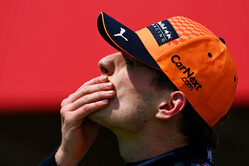 If which way to go on set-up was troubling some team bosses, so too was the question of who they feel will come out on top in this year's title fight.

With seven races remaining, despite the fact that a number of drivers have a mathematical chance of winning the world championship, it is, to all intents and purposes, a two-horse race.

But who do the team bosses think will come out on top?

"Personally, I hope Max Verstappen will be, clearly.," said Franz Tost, with whom the Dutchman made his F1 debut.

"It's difficult to say," admitted Laurent Mekies. "It's a great fight. It's after, whatever, 15 races or more, they are two or three points apart. It's great to see.

"Looking from the side, it seems that we will see a bit more speed in the latest races with Max but I'm sure it's going to be a very tough fight until the last race."

"Very difficult to predict, just because they are so close," said Otmar Szafnauer. "They're two great drivers fighting for a world championship that's very valuable.

"(It's) hard to say," he admitted, "Lewis is very experienced. He knows how to win world championships. Max is very fast, so let's watch and see. We only have a quarter left and we'll know."

Asked to pick one or the other, he replied: "No, because I can't! If I say one, I'll probably be wrong!"

"I think it's unpredictable and I don't make too much... I don't spend too much thinking of that because we've got other issues and problems. So, I don't care," admitted Jost Capito.

Asked if he is enjoying the championship fight, he said: "Yeah, of course I'm enjoying it but if you are at the pit wall you are so much into what's going on with your cars, so sometimes at the end I have to ask who won?"

"So the question is who do I think will win the championship, yes?" said Guenther Steiner. "Max," he added. "Keep it short."

Asked why, he replied: "Because there's more points at the end, that is why. I don't know why. That's the answer: Max!"

Again, asked if Red Bull is the car to beat, he said: "I said Max is the driver to beat."

"(It's) difficult to know," admitted Frederick Vasseur. "It's a very tight fight but I think one of the topics is also the reliability. We saw this morning Lewis will have to introduce a new engine, it will be a penalty and this could be a game-changer for the championship because they are so close. Every single small event could decide for the championship.