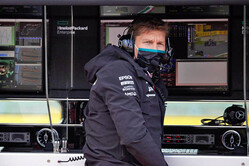 We've all been there, sat on our sofas, watching a Grand Prix and questioning a strategic call made by a team. It appears straight-forward from the outside, but what you don't see back home is the amount of data and analysis that goes into those calls to 'box, box, box!'

Most people associate an F1 'strategy' with the call to pit and the decision of which tyres to fit. And that is true. During the race itself, the aim of the strategy department is to optimise the car against the competition, to finish the race in the highest position possible. But you need to take many steps back to really see the wider work of the strategy department.

If you take one step back from the race, the strategy team are working on how the team wants to approach qualifying. But one step back from that is the wider approach to the weekend, how you want to allocate your resources and tyres during sessions, and even further back is the wider view of the season: which tracks will we perform better or worse at, how to approach these and where do we see the performance picture for the season?

The strategy team typically works several races ahead, making sure baseline preparations are made well in advance. The team will be using every available piece of data to build a detailed picture of all possible scenarios and their implications for strategy. As each race weekend is completed, systems are updated to reanalyse what to expect from the upcoming events - every race weekend brings a huge amount of understanding of where a team is weak, where it is strong and how it can improve.

Ahead of a race weekend, the strategy team have a whole host of data and information available to them, looking into understanding the weather patterns and the detailed learnings it took from our last time at the circuit, tyre performance and what it has learned since then. They'll also be looking into patterns of cars and how they perform, track evolution and much more. With the key output of these preparations being to determine how fast the team expects to be, how fast its rivals will be and how it thinks the tyres are going to work.

During Friday's practice sessions, a key focus is on how the tyres perform and how long they last. Mercedes uses data not just from its own cars but from the entire grid, to build an understanding from multiple samples. It's tough to get the required learning from one-hour practice sessions but the aim is to extract as much understanding as possible.

They'll have lap times, GPS, tyre data and a whole host of other inputs for both itself and its rivals, with its strategists absorbing this information to make the required decisions. By the end of FP2, the aim is to know what set-up decisions are required and have a plan for qualifying. But undoubtedly the most important thing is the decision on which tyre it wants to aim to start the race on, which needs to be decided before FP3.

Saturday's focus is therefore on building on the existing data set and focusing on low-fuel running, locking in the plans for qualifying - which tyres to run in each session, what the run plans should be, the time of garage exits, tow or no tow, to name just a few of the elements at play.

Mercedes will formulate a plan (fuel loads, lap counts, and other fundamentals), and then tune the plan throughout qualifying based on new information (track evolution, competitor performance, tyre offsets and issues). It also need to react to anything outside of its control, like weather and red flags.

You only have a finite amount of tyre resource to use, so the run plans and which tyres to fit for each run are a hugely crucial strategy decision. Everything done in Q1 impacts the following two sessions, so using your resources correctly and the best you can, to start as high up the order as possible, is a tough balancing act.

During the race itself, thousands of data samples are arriving into the strategy tools every second, from the team and its competitors. The team will enter a race with a good baseline on things like tyre degradation curves, pit stop loss, weather predictions, ease of overtaking and much more, but the tools are continuously being retuned and refined as fresh data appears, allowing the strategy team to predict what is going to happen.

The strategy team is continuously reviewing this information and spotting things that appear in its tools, which may indicate a change of planned strategy or impact an existing one. There are intercom channels with strict protocols, to allow clear and concise communication, where the strategy team can raise and debate what is happening, what the race planner forecast is saying and what could happen in the future, and therefore how the team could react.

Other intercom channels are also discussing strategy throughout the race, with Toto Wolff and other members of the pit wall and race engineering team drawing on their knowledge and expertise to share their thoughts.

Teams will also come into an event with plans for different scenarios and these will be constantly monitored. Pre-planning is crucial to be able to react swiftly and calmly to unexpected moments, such as Safety Cars, so when they do appear, it's about executing the plan already in place.

Of course, no matter how much planning is involved, some decisions do still need to be made on the spot. Weather can be so unpredictable, creating some of the hardest calls the strategy team has to make. The severity of a rain shower, its location on the track and its effect on available tyre grip make tyre choice in the rain a torturous decision.

For all the detailed systems in place, some developments during a race are obvious and decisions to deviate from the plan are made in the blink of an eye. For example, the decision to pit Lewis Hamilton at Monza was a quick one, having seen from his sector time after his rivals had pitted, that it wasn't going to be quick enough, and the planned strategy wasn't going to work.

There are thousands of decisions that happen during the course of a race weekend, many of which are invisible to people outside of the team. There are so many moving elements across each session and particularly in qualifying and the race, with hundreds of different strategy options to analyse before selecting the one that works best for your two cars.

F1 strategy is a continuous game of multi-dimensional chess, but it's a challenge that strategy teams up and down the grid relish - it's what keeps them coming back for more.