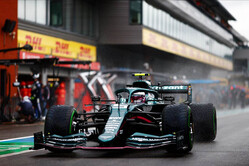 Sebastian Vettel: "The most important thing today is that Lando [Norris] is OK after his crash. I stopped to make sure he was because I saw a lot of debris and it is never a nice place to go off. From our side, we can be happy with fifth on the grid tomorrow. I was getting increasingly into the groove with the car and I was happy with my laps - until the final one. I had already put in a good lap time and I wanted to extract more, so I was pushing a little harder, but I went off at Turn Eight and lost some time. I think if we had avoided that, I could have battled with the guys at the front of the field. The forecast suggests that tomorrow will be similar weather, which suits us, so we can fight for a strong result and get some good points for the team."

Lance Stroll: "It is a difficult qualifying result to take. The car had felt good in the tricky conditions throughout the day, and the end of Q2 was crucial because conditions were improving all the time. We switched to a new set of intermediate tyres to try and capitalise on the situation, but we just ran out of time to begin a flying lap, which meant a lot of drivers around me were able to easily improve their times. We will look into how that happened and learn from it. It means we will start at the back of the field tomorrow [owing to the grid penalty from Hungary], but I still believe we can get a result tomorrow because this is a circuit on which you can overtake, especially if the weather continues to be changeable."

Otmar Szafnauer, CEO & Team Principal: "It was very disappointing that we were not able to give Lance two laps on new Inters in Q2, owing to his being delayed by Fernando [Alonso], and the result was that he was not able to get through to Q3. It is doubly upsetting because Lance is brilliant in the wet. In fact, the last wet Formula One qualifying session, which was at Istanbul Park in 2020, resulted in a Lance pole position. Had he made it across the line in time, it is likely that he would have been very, very near the front in Q2. It may well rain tomorrow and Spa is a circuit on which it is possible to overtake, so you can be assured that he will be gunning for points, even though he will be starting from the back. As for Seb, he drove a solid quali hour today, even stopping to check that Lando [Norris] was OK after his big Eau Rouge shunt, and ended up a fine P5. Another podium finish has to be his target tomorrow."