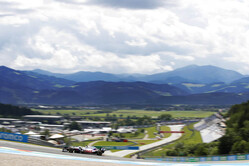 The eighth round of the 2021 FIA Formula 1 World Championship began with practice on Friday at the Red Bull Ring in Austria as teams prepared for Sunday's Styrian Grand Prix.

With thunderstorms threatening to disrupt the weekend, FP1 crucially remained dry affording plenty of laps for the rookie pairing of Mazepin and Schumacher. Both VF-21's ran the Pirelli P Zero Yellow medium rubber for their respective wake-up runs. A switch to the Red soft tires saw each driver bank their fastest laps of the opening session. Schumacher produced a best tour of 1:07.473 (P18) with Mazepin recording a 1:08.081 (P20) as his quick lap. Mazepin remained on the softs to start his high-fuel stint before pitting for mediums. Schumacher returned to the medium set to run to the checkered.

Some light rain was detected prior to FP2 but the forecast storm failed to materialize allowing a second dry session for the 20-car field. Mazepin and Schumacher got down to business immediately with some baseline laps on the medium rubber. Qualifying simulations meant bolting on fresh sets of the soft tires. Schumacher clocked a 1:06.886 which placed the German 17th overall. Mazepin was 18th on the timesheets with a best lap of 1:07.404. The Russian concluded his run plan with a high-fuel outing on used mediums. Schumacher sampled both his softs and mediums for his final long-run of the day.

Nikita Mazepin: "The first few laps in FP1 were a lot calmer in comparison to tracks I know less - such as Portugal, Baku and Monaco for example. Overall, it was quite a chilled working day. I was pretty surprised this morning when I woke up because I expected it to be pouring down with rain and it wasn't. We got some dry running in, some understanding of the set-up, but I'm not sure if we're going to be using much of that knowledge tomorrow subject to the weather. I'm trying to be happy regardless of the factors I cannot control. I can learn a lot from the conditions that we had today, but it's also a great learning opportunity for me and the team to get this car around in the wet conditions. Let's see what the weather brings."

Mick Schumacher: "Overall, we had steady improvement over the day. We got to do everything we wanted, and I feel like we're in a pretty decent place. There were a few raindrops at the beginning of FP2 but they didn't do any harm. There are always things you can improve, whether that's with driving or the car. It's not far away from what I want in the car, it's just about finding a little percent here and there to try to get it to exactly where I want it to be. I wasn't expecting a Q2 appearance at Paul Ricard but we were there, so hopefully we'll be able to make a surprise appearance again here."

Guenther Steiner: "Not a bad session for our cars today. We did a lot of running which is the most important thing for the guys to do at the moment. In FP2, we were a little bit concerned about rain, so we went out straight at the start to do as much as possible and then came back in, before coming back out at the end to do a practice start. I would say it was quite a boring session for us, but boring sometimes is good because we did everything that we wanted to do."