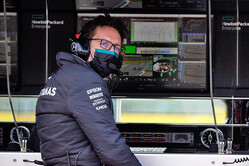 Mercedes engineering director, Andrew Shovlin has a stark warning for his team, admitting that Red Bull "will win the championship if we don't improve our car very quickly".

While the record books will show that Lewis Hamilton finished second in the 2021 Emilia Romagna Grand Prix, and, courtesy of the fastest lap, headed to Portugal still leading the championship, the reality is that despite a masterful comeback, it was a difficult afternoon for Mercedes... and that's before one considers Valtteri Bottas' exploits.

Following his spin at Tosa, the Briton dropped to seventh, just moments before his teammate added to Mercedes misery by colliding with George Russell, and pitting under the Safety Car that was initially deployed before the race was red-flagged, Hamilton rejoined in ninth, a lap down on race leader Max Verstappen.

One of a number of drivers allowed to un-lap himself before the restart, Hamilton subsequently staged a remarkable revival, passing Lando Norris just a couple of laps from the end to claim second.

However, the German team's engineering boss, Andrew Shovlin is only too aware that Mercedes cannot continue to ride its luck.

"I like to think we could have put them under some pressure in the race," he says. "Whether or not we had the car to win, I don't know because I don't know how hard Max was pushing at times.

"But looking at the sectors Lewis was doing and where we were in the corners, we felt it was really close," he adds.

But we are not going to walk away from this patting ourselves on the back, saying that we might have had the faster car by a small amount. We are walking away from here saying, we are not good enough and they will win the championship if we don't improve our car very quickly.

"That is our mind-set, that we are still the ones chasing."

"We still have a deficit with the car," said team boss, Toto Wolff. "We were on pole, but if Max had put in a decent lap we were probably 0.25s behind, maybe 0.3s. That is simply what the pecking order is at the moment.

"In the race it was very difficult to judge because of the circumstances, but we had a very good car in the wet and in the drying up.

"We are slowly starting to understand it, but according to the data we still do not have a car and power unit that can match the Red Bull Honda."