The voice of F1, Murray Walker, has died 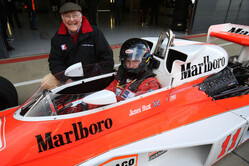 Murray Walker, for millions of fans of the sport, the voice of F1, has died aged 97.

The British Racing Drivers' Club - of which he was a long-standing associate member – announced the sad news this evening shortly after the second day of pre-season testing had come to an end.

"It is with great sadness we share the news of the passing of BRDC Associate member Murray Walker OBE," read the statement from the club.

"A friend, a true motorsport legend, the nation's favourite commentator and a contagious smile. Murray will be sadly missed, his mark and voice will live on in motorsport and our hearts forever.

"We thank Murray for all he has done for our community. Sending our love and thoughts to Murray's family and friends in this difficult time.

Son of a motorcycle racer, on leaving the army, having attained the rank of captain with the 4th Armoured Brigade, Murray Walker took up motor cycle racing, at one stage competing against future world champion - on two and four wheels - John Surtees.

His 'day job' was in advertising, and though he denied the claim that he came up with the famous Mars Bar slogan, 'A Mars a day helps you work, rest and play', he was the brains behind the almost equally famous slogan, 'Opal Fruits, made to make your mouth water', among others.

A keen fan of motorsport, Walker first served as commentator publicly at the Shelsley Walsh hillclimb in 1948 and subsequently auditioned for the BBC at the 1949 Easter Monday race at Oulton Park. That same year he formed part of the BBC's commentary team at the British Grand Prix at Silverstone.

Over the years that followed, while still working in advertising, he commentated on various forms of motorsport across the disciplines.

At a time television coverage of F1 was sporadic he occasionally served as commentator, taking up a full time role when the BBC began regular coverage in 1978.

Between 1980 and 1993 he formed a legendary partnership with James Hunt, the two playing off one another in a combination that proved popular even with TV viewers who were not fans of the sport.

Following Hunt's untimely death in 1993, Walker worked with Jonathan Palmer until the end of 1996, subsequently paring up with Martin Brundle from 1997.

Though his final F1 race as official commentator was the 2001 United States Grand Prix at Indianapolis, Walker continued to make appearances at the microphone at various events over the years that followed.

While his numerous gaffes - to become known as 'Murrayisms' - earned him the sobriquet 'Muddled Talker', his sheer enthusiasm and infectious passion was unrivalled and for many millions of all ages he will always be the voice of F1.

As news of his death spread through the paddock and beyond, drivers, team bosses, fellow broadcasters and fans around the world paid tribute to the man who had entertained them and fired their enthusiasm for decades, talking them through some of the most iconic moments in the sport's history, not least that awful weekend in 1994.