Allison giving nothing away on token use 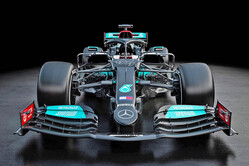 Like its rivals, Mercedes had two development tokens to use on its new car, however technical boss, James Allison is refusing to say how his team used theirs.

With the pandemic leaving F1 to postpone the rules overhaul until 2022 and essentially carry over the 2020 cars into this year, the teams were allowed two development tokens for non-aero upgrades ahead of the new season.

While some - we're talking Haas - have opted not to use them and McLaren has used theirs to accommodate the switch to a new engine supplier, most are willing to talk about how their tokens have been spent. Not so Mercedes.

"What's carried over will be different from team to team," explained the team's technical director as the German outfit revealed its 2021 contender, "because the rules didn't require you to carry over the same things.

"The only thing we can say with certainty at this stage is that everybody's cars will have significant areas that are the same as their 2020 car," he admitted, "but those areas will vary from car to car, depending on how they chose to spend their tokens.

"In addition, there are some parts of the car that you can change token-free, for example the power unit, the cooling systems, the suspension and of course all of the aerodynamic surfaces.

"We have spent our tokens, but we won't reveal how we used them just yet. That'll become clear in good time," he added, ominously.

One area of the W12 which Allison appeared particularly sensitive about at today's presentation was the floor.

"The bit we're not showing you is down along the edge of the floor," said the Briton. "That area is the area that was most affected by the new regulations, where they tried to pull performance away from the car by changing the floor regulations.

"Down there, there's a bunch of aerodynamic detail that we are not quite ready to release to the world," he admitted. "Not because it's not there, but because we don't want our competitors to see it. We don't want them starting to try and put similar things in their wind tunnels. It just buys us a couple of weeks extra.

Asked about the difference to its predecessor, he said: "It doesn't take much more than a glance, to see that it is an old friend in many ways. It's the same monocoque as last year, same gearbox as last year, and lots of the same structure underneath as last year.

"But look a little closer and you'll also see there are some fairly significant differences," he continued. "Just a glance at the sidepod there, and you'll see a rather sexy looking bulge in the engine cover, which is hiding some of the work that our friends at HPP have done to squeeze more horses into that power unit for us for the year.

"Across the whole car. It is actually dressed in new clothes, new aerodynamic finery, that we hope will make it a successful car.

"We are utterly excited about everything that's in front of us, but equally anxious," he admitted. "So much has changed in these regulations at a detailed level, but do really punish the car from a performance point of view.

"Have we done enough to recover back that performance better than our competitors? None of us know, and yet we know we really care about it. And so the anxiety is quite high this time of year."

Though it went on to claim both titles (again) last year, during pre-season testing there were definite concerns over reliability. Ahead of what should be the busiest schedule in the history of the sport, this year the teams have just three days of testing in which to get things right.

"The fact that many of the systems under the bodywork remain the same will mean that if we're in decent shape, we won't need to spend as much of winter testing accruing mileage as we normally would," said Allison. "That will buy us more time pursuing performance investigations and learning about the tyres.

"If we have made a reliable car, we will be fine with three days of testing," he added. "If we have dropped the ball on one or more the main car systems, then there is a risk that we will be playing catch-up all year."