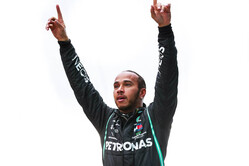 Mark Webber says the timing of George Russell's debut for Mercedes couldn't have come at a worse time for Lewis Hamilton as his contract negotiations continue.

With Hamilton testing positive for COVID, Mercedes had to call on the services of its protege, and Williams driver, George Russell for the penultimate round of the season, the Sakhir Grand Prix.

Despite having had no previous time in the car, the Briton did admirably, setting the pace in both Friday sessions, missing out on pole to his teammate by just 0.026s and leading the majority of the race.

However, a botched pit stop and a subsequent puncture destroyed any hope of the youngster making a fairy-tale debut for the German team, which must, under the circumstances have breathed a huge sigh of relief.

Russell's debut for Mercedes came at a time when most were arguing that Hamilton should be recognised as the sport's greatest driver of all time, a claim that might have taken a severe knock has his 'stand-in' won first time out in the same car.

While the debate has since gone quiet, Hamilton returning for the final race of the season in Abu Dhabi, Mark Webber claims that as the seven-time world champion negotiates a new contract, Russell's performance couldn't have come at a worse time.

"The timing for Lewis was just horrible," the Australian, an F1 winner and WEC champion, tells the At The Controls podcast. "I drove one thousand days in an F1 car with testing and practice and Grands Prix weekends.

"The whole thing put together over twelve years, if you look at how many actual physical days in the car, I think I had three days off, that's because I didn't want anyone near my car.

"You're just trying to look out for your own share price," he admits. "You don't want people to have exposure to your material and your people. And it's such a cutthroat industry. Even someone like Lewis, that was all downside for him, generally.

"George drove well," he adds. "Yes, it was the easiest track in the world, it wasn't exactly Suzuka. But he still drove brilliantly in a compromised environment in the car."

As Toto Wolff admits that a new deal might not be agreed until just before pre-season testing gets underway, Webber believes Russell's performance combined with the impending budget cap and the on-going fears over the damage to the sport's finances inflicted by the pandemic, will compromise Hamilton's bargaining position.

"Obviously he and Toto enjoy a very good relationship," he says. "I think that they would have liked it to have been nipped in the bud by now. But obviously the timing around certain things, particularly his virus right at the end and this budget cap for drivers, which is coming in for drivers in the future, whether that's going to clip him in the back part of his deal, depending on how long the term of the contract is of course, it's not going to be starting next year, but looking at how that would potentially challenge the back end of his contract in terms of how the numbers would look. So I'm sure that's all on the table.

"He wants to extinguish every single opportunity you can, financially, out of the situation because he believes he has a value and he does. He brings a lot to the sport, he brings a lot to Mercedes. He is box office and he wants that to be recognised."

Indeed, we hear that Hamilton's belief that he is "box office" goes far, far beyond the Mercedes team.