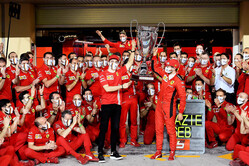 Charles Leclerc and Sebastian Vettel did not score any points in the final race of the 2020 Formula 1 season, the Abu Dhabi Grand Prix, held at Yas Marina circuit, finishing 13th and 14th respectively. Ferrari thus finishes sixth in the Constructors' championship with Charles eighth and Sebastian 13th in the Drivers'. It was Vettel's 118th and final race at the wheel of a Scuderia car. Over the course of six seasons, he took 14 wins, to put him third behind Michael Schumacher (72) and Niki Lauda (15) in the list of all-time Ferrari winners. He also took 12 pole positions, 14 fastest race laps and scored a total of 1400 points.

Charles and Seb spent the entire race fighting in the middle of the pack, running different tyre strategies: the Monegasque started on Mediums and tried to do something different to those running the same tyres, by staying out when most of the field pitted under a Safety Car, when Sergio Perez left his car at the side of the track. Charles then pitted on lap 22 to fit the Hard tyre. Vettel did the opposite, starting on Hards and changing to Mediums with 20 laps remaining. However, the end result was similar for both drivers, who finished one behind the other, outside the points.

After the race, the team gathered round Sebastian who was presented with a commemorative cup, engraved with the names of the 14 races he won with the Scuderia. There was also a photo with the entire team swapping their usual red face masks with a white one, based on Vettel's helmet design, with the message, "Grazie Seb."

Scuderia Ferrari and seven other teams, are staying put at Yas Marina, even though this was the last race of the season, because the Young Driver Test takes place on Tuesday. The two SF1000s will be entrusted to Robert Shwartzman, Ferrari Driver Academy talent, fourth in the Formula 2 rankings this year with four wins, and Scuderia's simulator specialist, Antonio Fuoco.

Charles Leclerc: "Today, we just weren't quick enough. We struggled to overtake and were not very good in low speed corners. So we tried something different with our strategy to put ourselves in a better position. Unfortunately, it didn't work out.

"It has been a difficult season for us and it's a shame to end it like this. All the same, we have made some progress over the past few races, and hopefully we can continue doing so over the winter to come back stronger next year.

"I want to thank Seb for everything he has given to the team. He is an amazing person and a fantastic driver. He pushed me to perform better and to improve. It's been great to have him on the other side of the garage for the past two years and I wish him all the best for the future. I am also happy that Carlos is joining the team next year. He is very quick, solid, and consistent as a driver. It's going to be a big challenge for me and I'm already looking forward to it."

Sebastian Vettel: "This race is not one I will remember. But what I will remember are the gestures of all the team members, the mechanics, the engineers, the catering guys and so on. I think the energy has been different today and I felt that, and will carry it with me forever. I will miss Charles. Obviously he gave me a headache here and there, and we are at very different stages of our lives and careers. But he's certainly a good kid and I think he will go a long way, he will be the man of the future. I hope he gets the car he deserves.

"In general, I hope that everyone can have a better season next year. It has been a very tough and tiring one for the obvious reasons. So I hope next year you will see us smile, see us angry and sad, and that it's not all hidden behind a mask. That's the main wish I have. I look forward to starting a new journey, but for now I'm happy to be going back home and recharging."

Mattia Binotto, Team Principal: "Unfortunately, there's not much to say about today's race, except that it was a disappointing end to a disappointing season. We have to turn the page and look to the future, taking on board what we have learned during these very difficult recent months. We have to get back on top, working nonstop on next year's car to make up the performance gap to the best.

"Nevertheless, this was also a special day as it was the last time Sebastian raced in our colours. He is the third most successful driver in Ferrari's history, with only Michael Schumacher and Niki Lauda winning more races with the Scuderia. You only have to look at the numbers to see the mark Sebastian has left in Maranello during his six years with us. He joined us full of hope and his arrival was eagerly anticipated. He leaves us many happy memories and also a few regrets for what might have been. It's a shame, but that's life, for a driver and for a team. One thing is for sure, even if as from next year he will be a rival on track, he will always be part of the Ferrari family."