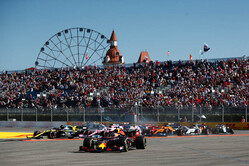 Back in the day, the very nature of race circuits determined track limits, be it trees, brick walls, the Mediterranean, fields of wheat or precipices, drivers knew that to exceed the limit could prove costly... even fatal.

With the emasculation of the old tracks and the TV friendly look of the new, first we had wide expanses of gravel which then gave way to tarmac.

The drivers, always seeking the minutest fraction of an advantage, have regularly taken it for granted that the 'wasteland' beyond the black stuff is there for their benefit, as they either seek to hunt down a rival or lose him.

In its attempts to crackdown on the practice the FIA has been getting tougher, but still drivers try it on.

The attempt to curb the practice in Sochi, particularly at Turn 2, has led to drivers questioning the move, some even calling for the notorious corner to be completely re-profiled.

Poacher turned gamekeeper, Ross Brawn, admits that there is no quick fix to the thorny issue.

"There were some contentious parts of the circuit this weekend, and I know the FIA are very objective and constructive in how they view these things," he writes in his Russian Grand Prix debrief for the official F1 website. "I'm sure they will be taking a look at the incidents in Turn 2 to see if there is a better solution.

"There is a constant battle to stop drivers abusing track limits," he admits. "You don't abuse track limits if you end up in the gravel. They do if it's asphalt. But if you have gravel everywhere, it gets thrown on the track and you lose cars if they go off, which we don't want to do.

"So you are damned if you do, damned if you don't. Predominantly, asphalt is the better solution, but we have to have track limits to make sure drivers don't abuse asphalt run-off.

"If you go into a corner knowing the worst thing that will happen is you're (going to) run over asphalt and re-join, you will commit more to the corner.

"I'm sure the FIA and FIA F1 Race Michael Masi will look at Turn 2 to see if there is a better solution," he concludes, no doubt with his fingers tightly crossed.