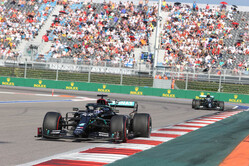 The incident(s) that effectively turned Sunday's race on its head, and meant Lewis Hamilton's equalling of Michael Schumacher's record of 91 race wins is on hold, appear to have all the twists and turns of the previous race at Mugello.

As if the penalties weren't enough to get the sport back on to the front pages, the world champion's subsequent claim that they are part of some conspiracy to "stop" him were.

Having initially said that "they’re trying to stop me", he subsequently widened the victims of the alleged conspiracy to include his team.

"Whenever a team is at the front they are under a lot of scrutiny," he said. "Everything we have on our car is being triple-checked, they are changing rules such as the engine regulations and lots of things to try and keep the race exciting, I assume.

"I don’t know if the rules in terms of what happened today is anything to do with it," he continued, "but naturally that’s how it feels. It feels like you are fighting uphill but that’s OK. It’s not like I haven’t faced adversity before.”

No doubt the world champion was also riled by the action taken earlier that morning by race officials to prevent a repeat of his 'podium protest' in Mugello, all drivers having been given strict instructions on their attire after the race ended and during the podium ceremony.

"The practice start location is obviously very circuit specific, and detailed in the event notes," said the Australian. "So at every other event Lewis has, along with all the other drivers, complied with the requirements of where they perform a practice start in accordance with the race director instructions.

"I would say that the reason why we determine where the practice start location is is for the safety of all drivers, and also so everybody is aware of what is actually happening. We determine its location for a deliberate reason."

Other than whether the starts were performed in the wrong place, Mercedes boss, Toto Wolff believes that as they took place before the race they did not warrant an in-race penalty.

"The race director's notes state, if I am well informed, that you must to the practice starts on after the lights on the right-hand side of the pitlane. And what's what happened," said Wolff. "There is no mention what the right place is in the race director's note, nor is it in the regulations. We disagree on that one. We agree to disagree on that one.

"He received a 10-second penalty for the reconnaissance lap infringement," he added. "An in-race penalty for that can also be debated, but we have to take it on the chin and move on."

"I think you need to have a look at everything on its own merits," said Masi. "In the stewards view, performing that practice start in that area, in their view was a sporting advantage. Having spoken to them quickly, and therefore they thought an appropriate penalty was a sporting penalty."

The stewards, subsequently deciding that it was a team error, rescinded the two penalty points handed to Hamilton, points that took him perilously close to an automatic race ban.

However, it was subsequently pointed out that when Hamilton told the team where he was performing the starts and the team gave him the all-clear, he was not in visual contact with the team who could not see exactly where he was talking about.

Nonetheless, having spoken to Hamilton after the race, "it was clear it was actually a team instruction to Lewis of where he could perform those practice starts," said Masi. "On that basis the stewards rescinded the penalty points as they thought it was inappropriate and as a result have fined the team €25,000 for that instruction."

Of course, there remains the question of whether some might feel that in his allegation of a plot against he and his team, Hamilton might have brought the sport into disrepute, after all, the 'conspiracy' story is making more headlines today than the actual race.