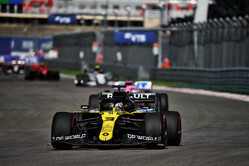 The points haul means the team moves onto 99 points - more than its entire total from 2019 - to remain fifth in the Constructors' Championship.

An action-packed race start saw Esteban progress from seventh on the grid to fourth by the end of lap one with Daniel remaining fifth, despite running as high as third place for two corners after an electric getaway off the line. Esteban passed Daniel at Turn 7 on the opening lap.

Daniel fell back to sixth on lap 15 with his Soft tyres starting to lose rear grip and he pitted a lap later for Hards. Esteban pitted on lap 18 for Hard tyres but lost a position when Sergio Perez ran longer on the overcut strategy. With those on the reverse strategy a threat, Esteban let Daniel by on lap 26 to make further inroads and cover those behind. After running wide at Turn 2 during the move, Daniel was given a 5-second time penalty.

From there, Daniel extended the advantage to sixth place to ensure the time penalty did not drop him down the order with Esteban defending brilliantly from a fast-charging Daniil Kvyat on home turf to hang on for seventh.

Daniel Ricciardo: "I'm pleased with the result today and it's a decent one for the team as well. I had a great start and got up to third in the first few corners before falling back to fifth. The race then changed on the Hard tyres, we had good pace but obviously I made the mistake getting past Esteban into Turn 2 and had the time penalty. I locked the front brakes, so I take responsibility for that, but I was able to put that mistake right and recover well. Taking a step back, I'm pretty happy with my day, and the end result, as we take home some good points. The car is working well, and reliability is good, so everything has come together nicely for us."

Esteban Ocon: "It's a great team result, overall, so that's good. When we put on the Hards, the car was not the same. It was a bit tricky to drive and I was struggling with grip and balance and I just wasn't as happy as I was on the Softs. I was almost following Max [Verstappen] on the Softs at the beginning of the race, so that's something for us to review there. Potentially, more points were possible, but we're still happy with the result and how our race went. We know the car is quick and that's good for future races. We're going in the right direction; we're catching the guys in front and that's the target for the Constructors' Championship. We're getting there."

Cyril Abiteboul, Team Principal: "The weekend has delivered a strong team result with 16 points added to the Constructors' Championship. We felt since Friday morning that we could achieve that sort of position and it's good to have done that. Obviously, you always want more, but the four cars that finished ahead of Daniel deserved to be where they are. We knew we would be under the threat of the cars starting outside the top ten and that's exactly what happened with Leclerc and Kvyat. But Daniel was really impressive in building the required gap to Leclerc to absorb the five-second penalty from going deep into Turn 2 when we swapped the cars to mitigate the time lost behind Vettel. Esteban, on his side, struggled a bit more with grip at times during the race, but was remarkable in defending from Kvyat for more than 20 laps and contributed to the overall team achievement. We leave Sochi with 99 points after 10 races, which is more than what we scored last year over a 21-race season, which is a clear demonstration of the team's progression, year on year. It's also closer than ever to the two teams ahead and it's going to be a very exciting fight with both of them to the end of the season."