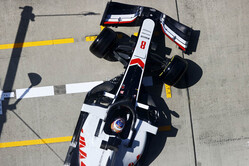 Along with Mercedes and Renault, many feared that Haas might bow out of the sport at the end of the year. However, last week's news that all ten teams have committed to the new Concorde Agreement appeared to allay those fears.

While there remains doubt over the precise set-up of the German team moving forward, its French rival is clearly determined to make progress in the coming seasons having announced a number of new signings.

With his team slipping down the rankings since its impressive fifth in 2018, there was talk of Gene Haas having become disillusioned with the sport, the American having said that the vast difference in budgets between the teams having created a separate championship, with the midfielders fighting it out among themselves while the 'big three' moved further and further ahead.

Coupled with the disaster that was Rich Energy and the fact that the 'F1 project' appeared to have paid off in getting his machine tool company's name out there, it was feared that the American might take the opportunity to pull the plug.

Not so, says Guenther Steiner, who admits that the forthcoming budget cap played a major part in convincing Haas to remain.

"I guess Gene looked at it and Formula One's still a very good tool for getting his brand name, Haas Automation, out in the world," said the Italian. "It works - otherwise he wouldn't be doing it.

"He loves the sport as well," he continued. "Even if it is a big financial commitment, with the new regulations coming in, it should make the playing field more even and the commercial aspects better for the smaller teams - so as a result he has decided to continue.

"For me, it means - even at the moment when we're not running competitively - we've got a Formula One team which works, and that's more down to the team than to me.

"I'm part of the team though, we all work together, and in the end, Gene believes in the team. Everybody is, for sure, happy to be moving forward now with the agreement signed.

"The payments, to make it more equal, will also mean the smaller teams get a little more revenue. It's never enough for the small teams by the way, but it levels the field and that should be the aim of a sport - any day, anybody can win.

"It'll take a while until that happens but for Formula One it's a big step in the right direction. Times change and I think Liberty did a great job in adapting to those times and making changes when it was needed. It was needed a few years ago, but it's better late than never."