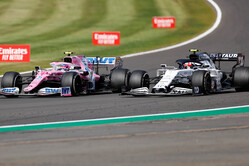 Pierre Gasly: "It's really fantastic for us to finish P7 today! It was a very strong race and probably one of the best ones from me. We didn't expect such a result today, we knew we could potentially score points, but it was going to be a challenge as the timing of the first safety car didn't play into our hands. I think we were P12 at the time and I had to fight my way through the crowd. It was tough but very enjoyable and I had many great battles with Vettel, Stroll and Giovinazzi. I struggled to get close to Sebastian, but then I had one shot to pass him and I knew I had to try and make it work. It doesn't happen every day that you're able to overtake a Ferrari on the outside, so I really enjoyed that one! I'm feeling good in the car and we know where we need to improve, so hopefully we can take another step forward in the coming weeks."

Daniil Kvyat: "I think it was a very strong race despite the fact it was cut short. I had a good start, great pace and made quite a few overtakes, catching up to the cars in front. We were on for a good result today when all of a sudden at Turn 10 I lost the rear of the car.

"I thought it was my fault, as at first I always tend to blame myself, but after reviewing the video we saw that something happened out of my control, so we will need to check all the data to understand what exactly caused the failure. It's disappointing as we could have scored some good points here today, but I will try again next week."

Jody Egginton (Technical Director): "Today's race has certainly been exciting with the closing stages providing lots of drama. Pierre had a fantastic race making several good passes, managing his pace and tyres very well in order to be able to push hard when it really mattered. Dany was also showing some good pace up until lap 12, so although he has not been able to score points today, we are confident he can bounce back next week. Today's performance has further validated the updates we have brought here are delivering, now we will spend the next few days reviewing the data to be able to extract some more from our package next week. The entire team worked fantastically today, and we achieved a result worthy of the hard work put in by everyone here and back in Faenza & Bicester."

Franz Tost (Team Principal): "We came to Silverstone with a few new parts and we were quite optimistic. From the very beginning of the weekend, we were able to show a good performance throughout all Free Practice sessions. For whatever reason, we couldn't put everything together in Qualifying, even if Pierre's 11th position on the grid, with a free tyre choice, was actually quite fortunate. Pierre had a fantastic race, overtaking many cars and we decided to call him to the pits during the safety car period - unfortunately the one due to Daniil's accident - to put him on base tyres, which paid off quite well. His seventh position at the end of the race brought some good points to the team. Daniil started the race from the back in P19, due to a 5-place grid position penalty, but he had a good start and was immediately very competitive, catching up to Pierre in P12. He was actually behind him when he had his accident at Maggotts, which we will need to investigate but it looks like it might be due to a rear puncture. However, the most important thing is that he got out of the car without injuries and he is completely fine. It's a real shame as he was showing great pace and I think he might have also finished in the points. We are now looking forward to next week for the second race in Silverstone."