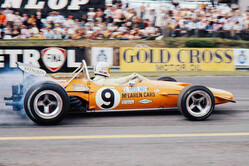 When Zak Brown first announced a livery reflecting McLaren's 'original' look, in the eyes of many it was merely a cosmetic change for a team clearly on a downward spiral, a desperate attempt to use tradition to deflect from an increasingly dire looking future.

However, as the Woking outfit, the second most experienced team on the F1 grid, continues its impressive revival it appears the team could is still looking to its glorious past.

A couple of pictures appeared on social media yesterday showing Lando Norris and Zak Brown at a filling station. Also shown was a papaya McLaren 720s and an F1 car.

To all intents and purposes it was a photoshoot, plain and simple.

However, keen-eyed observers noticed that in addition to it being a Gulf filling station, the F1 car was sporting a Gulf Oil logo on its engine cover.

Fans will remember that in the late 60s and early 70s, McLaren ran its works F1 cars in the papaya of sponsor Gulf Oil, as well as its fabulous Can-Am cars.

While McLaren subsequently adopted the liveries of sponsors such as Yardley, Texaco and, most famously Marlboro, the Gulf logo was to adorn the fabulous all-conquering Porsche 917 sports prototypes.

McLaren and Gulf revived their partnership again in the late 90s, the F1 GTR winning at Le Mans in 1997.

Having parted company with Brazilian state oil company Petrobras, after president Jair Bolsonaro criticised the cost of the 5-year deal, McLaren has been looking for a new partner.

Thus far, the Woking outfit is refusing to comment on the pictures.