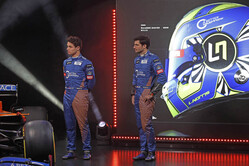 It is being reported that McLaren is considering selling a "minority" stake in its F1 team in a bid to raise vital funding following the pandemic.

Sky News - which has appeared to have a direct line into the Woking company in recent times - claims that the move is still at a 'conceptual stage' as it considers a number of options including raising more money from existing bondholders, its existing stakeholders said to be unwilling to invest more.

Though it is claimed that McLaren is seeking to sell a "minority" stake it is being claimed that this could be as much as 20 - 30% of the team.

In May it was revealed that the company had been turned down by the Department for Business, Energy and Industrial Strategy for a loan of £150m, and was subsequently revealed to be looking to raise £275m against its historic car collection and the MTC (McLaren Technology Centre).

"Like many other British businesses McLaren has been severely affected by the current pandemic," a spokesman told Sky News at the time, "and we are therefore exploring a variety of different funding options to help navigate these short-term business interruptions."

One of the leading voices in the drive to introduce the budget cap, McLaren, which is slowly getting its performance back on track following the nightmare partnership with Honda, recently revealed that Group revenue had crashed by 61.5%.

Indeed, though it was the first F1 team to take advantage of the government's furlough scheme, it was subsequently announced that the McLaren Group was to lay-off 25% of its workforce, estimated to be around 1,200 people, with 70 of the redundancies coming from the F1 team.

The news comes at a time Michael Latifi is being linked with further investment, or possibly a buy-out, of the Williams F1 team.