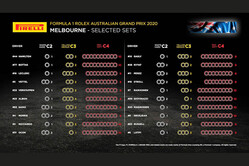 Buoyed by its pace and reliability in testing, not to mention the six successive titles, Mercedes heads down under to begin it quest for a seventh constructors' crown and a historic seventh for Lewis Hamilton.

With this in mind, the German team is taking the full complement of ten sets of the red-banded C4s, as are Renault, Alfa Romeo and Haas.

All the rest take nine sets bar Racing Point, the Silverstone-based outfit which has a reputation for working well with its tyres, taking just eight sets apiece.

The teams vary in terms of the C3 mediums and C2 hards, with Ferrari, Red Bull, AlphaTauri, Alfa Romeo and Williams seeing variation between its individual drivers.

The choice of C4, C3 and C2 is the same as last year, when Valtteri (2.0) got his season off to a perfect start, leading teammate Hamilton home for the first of nine 1-2s.

The first 15 finishers were on a one-stop strategy, Bottas starting on used softs before switching to new mediums, a strategy adopted by the three podium finishers.