The two banked sections at Zandvoort, Turn 3 (Hugenholtz) and Turn 14 (Arie Luyendyk), have been completed.

The idea for the banking started with a suggestion from Zandvoort's Technical Director, Niek Oude Luttikhuis in consultation with the late FIA race director, Charlie Whiting on how to make the circuit faster and the racing more spectacular.

To realise the potential of the circuit upgrades, Dromo drafted in the help of Geobrugg, a world leader in the design and fabrication of pretection systyems, along with US barrier specialist SmithFence and Dutch asphalt company KWS. 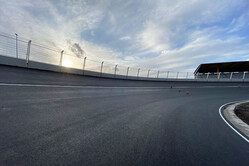 The result, according to Dromo founder Jarno Zaffelli, is a set of corners that will be challenging for the drivers in a similar way to iconic sections like Eau Rouge and Raidillon at Spa-Francorchamps or Maggots and Becketts at Silverstone.

"We did something that we thought would be really formidable to drive, that has no equal at any other racetracks," he said. "Turn 14 is quite ample and wide, making it full throttle, whereas the transition between Turn 2 and Turn 3 has a lot of elevation and banking changes. All of your horizon is tilting, all of your perception is evolving, you feel like you are being squeezed. It's like being in a corkscrew, depending on the line that you are following."

The drivers will arrive at the steep Turn 2 full throttle between 260 kph (161 mph) and 270 kph (167 mph) and then brake hard into Turn 3 (Hughenholtz) to accelerate into Turns 4, 5, 6 - the tightest part of the circuit. This will post a significant technical challenge for the drivers and the engineers when it comes to setup. 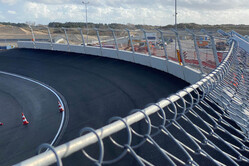 "The challenge will be really huge," added Zaffelli, "because cars are not designed to sustain such a banking like that, so the teams will have to think about it. Not only from the tyre perspective but also the suspension as well. The handling, going into Turn 2 and Turn 3, and then out of Turn 4 will require a setup that will be a compromise because if you want to go fast there you will have to go slow in another section."

Part of this will be understanding the bespoke asphalt mix that has been laid on the surface known as 'Flying Dutch', named after local hero Max Verstappen and produced on license from KWS. Flying Dutch is a special mixture that is designed to be laid at an angle and should result in fewer marbles from the tyres to enable more lines to be taken by the drivers. It was laid across the circuit earlier this month.

With the increased technical challenges that this will present to the drivers, circuit safety has been a key aspect of the banking construction. Geobrugg had to come up with a unique solution whereby the concrete barriers are installed at a 90-degree angle to the track surface and fixed by tethering cables. This is to ensure the safety of the drivers if they leave the track – if they were installed at a vertical angle it would act as a 'ramp' and not be effective in the event of a crash.

This was made with the help of concrete barrier producer Nordbeton, which did a demo installation at its factory, enabling it to define and understand the barrier stability in a banked section. In addition, a pull test was made to determine the friction levels to provide Geobrugg with all necessary input for the stability calculations required.

"We had to take a number of steps to be prepared for the installation of the debris fences at the banked sections," said Jochen Braunwarth, Director of Motorsport Solutions at Geobrugg. "We are pleased that our debris fence solution meets the requirements set out by the suppliers, along with Zandvoort, F1 and the FIA."

In addition to Geobrugg's mobile debris fences, there will be 282 meters of Steel and Foam Energy Reduction (SAFER) barrier installed by SmithFence, whose barrier solution can be seen on many banked ovals for NASCAR circuits and IndyCar.

"The degree of impact and the high projected speed of the turn is a primary reason in which the designers and the FIA have decided to go with the steel SAFER system for the high banked section of the track," said Nicholas Smith, Director of Temporary Fence & Motorsport Safety Systems at Smith Fence.